Diamond in the Rough: The Red Petticoat Saloon Series
By Abbie Adams and Maggie Ryan 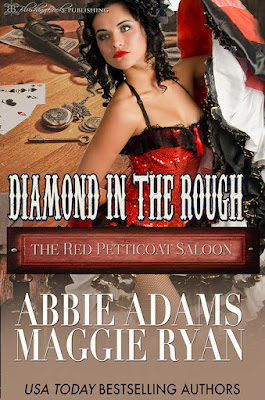 Tripp makes his own luck and doesn’t believe in chance—
until Lady Luck smiles up at him with her cat-like green eyes.

I'm happy today to have two of my favorite writers as my guest today. I think this is a book that everyone's going to like.

Marshal Tripp Houston makes his own luck and doesn’t believe in chance—until Lady Luck smiles up at him with her cat-like green eyes. If it’s the last thing he does, Tripp is dead set on bringing down the vile Shotgun Slick Gang. It’s been said that the outlaws have a woman traveling with them. Tripp is almost certain that woman is Diamond, especially with her sneaking around and asking lots of questions. But, if he’s wrong, and she is the innocent she proclaims, then once every last slimy one of the gang are swinging from a tree, he plans to hand in his tin star and settle down with the little card-dealing gem who ran away with not only his horse, but his heart as well. After all, he knows just how to tame a feisty gem.Diamond won’t take no for an answer, especially when it comes to those bossy men of Culpepper Cove standing in the way of finding her sister Damaris—not even when it means she will end up with a hot, achy backside over the knee of one very stubborn lawman. The trail she’d been following for months led her to Culpepper Cove and The Red Petticoat Saloon where she entertains the men while dealing blackjack and sifting through their conversations for information that will help her find Damaris—but she doesn’t go upstairs. That is until the night she makes a silly bet, (it had worked for Jewel, hadn’t it?) and ends up falling for the man who tried her patience at every turn. Will the bet cost more than her virginity? She hadn’t wagered her heart, but she may very well have lost it to him already.DISCLAIMER: This book contains the spanking of adult women and explicit sexual scenes including anal play. If any of these offend you, please do not purchase this book.About The Red Petticoat series:The Red Petticoat Saloon series is a collection of books written by #1 and USA Today bestselling authors. Each book tells the unique story of a different woman, 'a gem', who comes to the saloon to find a safe haven and discovers they become part of a family. Recurring characters appear in each book to allow readers a continuity as they learn about the women who have learned to bend but have not broken under the harshness that life has to offer. It is a series where strong, loving men find not only entertainment at the saloon but the special women who reside under its roof.

Wow! Hasn’t this been exciting? I don’t know about you but I’ve always been a fan of old westerns and more than half in love with dusty old cowboys—and the sterner, the better. John Wayne definitely fueled many of my girlhood daydreams, alongside Sam Elliot and Clint Eastwood. Now, we have Gabe, John, Jeb, Bo and the rest of those dominant men of Culpepper Cove. I hope you’ll find Tripp and Diamond’s story to be fuel for some of your own daydreams.

It didn’t take long for Diamond to start telling me her story. When I heard about The Red Petticoat Saloon Series, I wasn’t sure that I could participate, but Diamond is a woman who won’t be ignored. She demanded her place in the series and she got it. Although, I have to say a big, giant thank you to Maggie Ryan, my co-author.

Sometimes, no matter how vividly the characters talk to you, life happens and you just don’t get a chance to tell their stories. This was the case with my story, Diamond in the Rough. If, not for Maggie, Tripp and Diamond would still be buried on my hard drive with a slew of other unfinished works.

Thank you, Maggie. As always, you make me look good—and I hope you already know I’d be lost without you. Thank you for helping bring these amazing characters to life.

And to our readers, I hope you will fall in love with Culpepper Cover and the Red Petticoat Saloon family.

She glared at him. Rage poured through her veins. Her face flamed hot with her irritability and her mortification. She didn't see any way out of this dreadful situation. Every way she played it out in her mind, she was going to end up exactly as he said, writhing and sobbing over his thighs. And as much as that thought—and the image in her head—terrified her, she was filled with longing for it to be just as he'd said. The intimacy and the power he would have over her made her pussy clench in desire. Liquid heat flooded her core and dampened her thighs. Even though they'd spent the night together, for some unknown reason this dynamic seemed much more intimate.
Delaney had never had this type of feeling before and she refused to submit to him. Even though she could see no way out of this situation, it wouldn't happen without a fight. So without any more thought, she lifted her skirts and ran for her life. Her kitten-heeled boots were impossible in the soft sand near the wash, and when she made it to the wooded area again with downed branches, over-growth and rotted tree trunks, she feared she would break a leg or worse.
She didn't look over her shoulder to judge his distance; she could hear him coming close behind. His strong arms soon grasped her about waist, pulling her back against his muscled chest, her flailing legs doing nothing to hamper him as he hauled her all the way back toward the rock he'd pointed out previously.
"I suppose you had to try, but did you really think you would get far? Now all you did was double your punishment." He didn't even have the kindness to pretend he was as out of breath as she was. In fact, as if it required no strength at all, he held her there a moment or two while he unbuckled his gun belt and set it on the ground near the rock.
"I hate you, Marshal! I'll never forgive you if you do this." Delaney struggled against him the whole way, but was easily over-powered. Tripp sat down and pulled her right over his lap. She kicked and flailed against his hold but he still managed to clamp a leg over hers and snake his hand down under her skirt, then pulled it all the way up over her back.
"I'll never forgive myself if I don't… I'm going to teach you a lesson right here and now." When she pounded him in the back and legs with her clenched fists, he caught first one hand and then the other and clutched them together, holding them tightly at the small of her back. That arm and elbow of his, held her torso firmly in place, pressed down behind him. She was as good as hog-tied.
"You have no right!" She started to bounce and grind on his thigh, trying to slither away when he found the laces of her drawers and pulled them free. "No, please don't do that—not bare—no, you can't see me like this."
He chuckled. "Honey, need I remind you I've already seen your bare bottom? In fact…"
She hissed, interrupting before he could remind her of the fact that he'd seen every single inch of her bare. "I hate you. I hate you."

Abbie is a little girl at heart. She has always lived in a make-believe world, unwilling to share her fantasies with anyone for fear they would laugh at her, or worse, lock her up. She struggles with her desires to have a daddy who will keep her in line and yet baby her constantly. She writes to stay sane; this is her therapy.
Hiding her secret desires hasn't helped her, but sharing it with you, those of you who might also enjoy the same yearnings, well, that makes her happy. Come live inside Abbie's head if you dare.

#1 International and USA Today bestselling author for Blushing Books. I write both contemporary erotica and historical spanking romances. I enjoy writing about characters that enjoy the provocative D/S lifestyle of today’s times, as well as taking a step back into the past to write stories that take place in the Victorian era with age-play as a theme.
I live in the great Lone Star state with my wonderful husband. I have always loved reading. Growing up in a family with four children, it was difficult finding a place to be alone. I was probably one of the squeakiest clean girls on the planet as I would spend hours in the tub so I could read without being bothered. It wasn’t long before I began to make up my own endings to the books I was reading. From there, it just seemed natural to begin writing my own stories.
I never try to restrict myself to any one genre because there are just too many delicious possibilities out there and inside my head. I admit to being somewhat of a romantic, though, as my stories always must have a great deal of love, passion, corporal discipline and, of course, great, mind-blowing sex. I want my readers to be able to see, hear, feel and know the characters that I’m creating as well as I do when I bring them to life and transfer their stories to paper. I want my women to be strong of character but also strong enough to know that submission given in love and trust to your partner does not make you weaker, it makes you far stronger. I want my men to be sexy, strong, demanding alpha males who know how to take what they want while acknowledging it is a gift they have been blessed with by the women that have chosen to submit to them. I want there to be no doubt that they truly would die for the other no matter how others might view their relationship.