Her Convict Constable
by
Kate Charlton 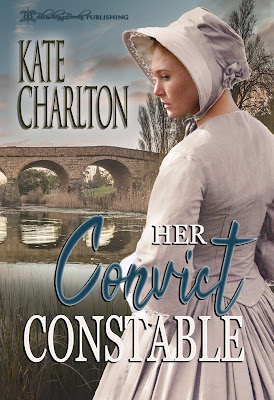 Can Tilly confide in Constable Joel Agnew
before it’s too late?

I'd like to introduce another new writer this week, Kate Charlton. Kate's latest book, Her Convict Constable has caught my interest and I think it will yours too.

Blurb:
She’s survived the mean streets of Manchester and slavery in a mill. Can she survive a brutal penal colony?

Convict Tilly Marsden has to serve four years as an unpaid maid in Australia before she can get the prized Ticket of Leave.
With freedom only two months away, Tilly agrees to turn a friend’s shirt into a dress.  When she discovers it was stolen, she throws it in the river.

Watching her is Joel Agnew, a convict working as an unpaid police constable. Sensing Tilly deserves a break, he dishes out some old-fashioned discipline. They both think that’s the end of the matter.

Then a body is discovered and Tilly finds herself in danger. Can Joel help her before it’s too late?

Publisher's Note: Her Convict Constable is a sweet romance with a bit of mystery and old-fashioned Victorian discipline.


Excerpt:
She could feel the constable’s eyes appraising her. Her cheeks burned and a million worries ran through her mind. Was he going to ask for sexual favours in exchange for letting her go? She’d have to agree if he did, even though she was scared and had no experience. She’d just have to pray she didn’t get pregnant or she’d end up back in Crime Class anyway. And they’d take the baby away from her when it was weaned, she’d never be given a chance to look after it.
Tears welled up again. Irritated, she blinked and swallowed hard, determined not to show the constable how upset she was.
“Well, by the look of you, you’re sorry about what you did,” said the constable. “And if you’ve come this close to getting your Ticket of Leave, I think maybe a different kind of lesson will do you more good than marching you back to the Female Factory.”
The relief that washed over Tilly was brief. The constable gripped her arm more firmly and pulled her closer towards him.
She steeled herself. This was it. She had to do whatever he wanted, whether that was sucking his cock or letting him take her up the arse or whatever he was into. If she wanted her Ticket of Leave she had no choice.
She gasped as he tucked her under his arm so that she was bent over, bum in the air. Oh, lawks, he was going to spank her. She hadn’t been spanked since she was fifteen and the supervisor at the mill had punished her and Sarah for being half a minute late for work. He’d put her first, then Sarah, over his knees, lifted their shifts and spanked their bare bottoms in front of everybody at the mill, including the men and boys. The spanking had left painful black bruises, but the humiliation had been worse. She hadn’t been able to meet the eyes of the other mill workers for days.
Now, Tilly kicked out at the constable in panic. “Enough!” he said firmly, gripping her harder. “Do that once more and I’ll fasten you in the stocks to do this.”
Tilly forced herself to calm down. She braced herself for the constable to bare her bottom.
But he didn’t. Instead he smoothed the shift down, making sure her bum was covered. But when his large hand descended in a scorching slap that made her squeak, Tilly realised the thin, rough material didn’t offer much protection.  Time stood still as the constable peppered her backside with slap after slap, each one as loud as it was painful. All she could do was gasp, squirm and yelp, and pray that no-one would come along to investigate the noise and see her being spanked. Desperately, she tried to move away but this only resulted in him grasping her even more firmly and smacking even harder.

Kate Charlton
Kate Charlton loves romance, history, mystery and the occasional dose of old-fashioned discipline. She combines all four in her books.