Welcome to Saturday Spankings – this past week has been a full one. I headed back to school, which is always an exhausting experience. But it’s been an exciting week too. I’ve had a contest and posted a story from Cassie’s past too. Yesterday's winner was Appy! Congratulations, I hope you enjoy it. I really want to thank everyone who came by to read and left a comment. You don't know how much comments encourage me. You can read the story here if you missed it. I hoped to get everyone in the mood to read the next Cassie book. Cassie’s River Living is to be out next Wednesday. I hope you’ll give it a try.

In last week’s snippet Cassie and Sue managed to get themselves stuck in a house under construction – spoiler alert, they are eventually found. Tom was not happy about Cassie’s exploring and trespassing, but he’s spent the long evening worrying and he’s doesn’t what to talk anymore about it that night. 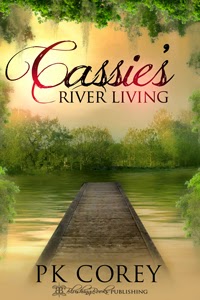 Tom sighed, “I know you didn’t plan it, but if you’d listen to me it would never have happened. I know you’re sorry, but you’re going to be even sorrier in the morning. I don’t want to deal with it tonight.”
I wanted it over with.
“Tom that’s not fair, if you’re going to spank me, just do it,” I almost snapped.
Big mistake. I don’t often misjudge Tom’s moods, but I had this time. His fear and anger were just under the surface. I was over his knee before I knew what was happening. He was spanking so hard and fast it took everything in me to not to reach back to protect my bottom. He wasn’t saying a word; he was just concentrating on wearing me out.

Reading the book in order is good, but not necessary - please jump in anywhere.

Meet Cassie, a former wild child, who meets her match, and creates the match of a lifetime. To nearly all who know her now, Cassie is a vivacious, sweet southern lady, who is the epitome of grace and proper behavior. Look a tiny bit closer and you’ll see that Cassie has another side – the one whose language could make a sailor blush as she drinks him under the table.
Thanks to her loving husband Tom, who even after thirty years of marriage, never hesitates to put Cassie over his knee when she strays too far from his view of ladylike behavior, few people other than close old friends know this side of Cassie exists.
Cassie and Tom show that love and passion are not the sole property of the young. Love and passion grows and changes with age. While aging may bring on challenges – the love and passion between these two people only grows stronger.

Cassie continues to live life to the fullest, from wheeling around in her new sports car to mastering the art of riding a motor scooter with no hands, she manages to keep Tom on his toes. The fly in the ointment is that Tom’s firm wants him back for a project and Cassie wants him all to herself.  When Tom takes the job, Cassie is left lonely and bored – never a good combination for her.
Left to her own devices Cassie makes some poor decisions, frightening Sue and causing Tom to lower the boom. Tom's new schedule for Cassie, including her getting a job, leaves her little time to get herself in trouble – yet she still manages.

Cassie’s on the move and loving life. Through paint ball game in the woods and water park adventure she’s gets to know her new neighbors as the new house is renovated.
Cassie is traveling too, from trips with just the girls, to conventions, vacations, and cruises with Tom and friends, she's always ready for the next adventure. But when Cassie begins having dizzy spells Tom thinks a slower pace is in order. Getting Cassie to slow down and take care of herself proves to be quite a challenge. A challenge Tom is more than determined to take on.

Check all the other great snippets out here today.