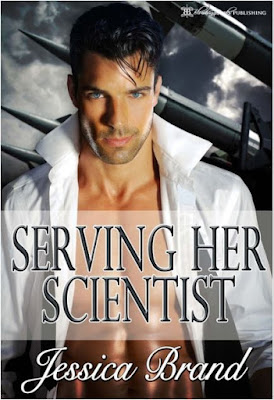 I'm happy to be hosting Jessica Brand today. I love the primes of this book. It shows a real awakening.

Blurb
Paul and Donna are happily married. Maybe their marriage isn't the hot, pulsing sex romp it was when they first said their I dos on the beach so long ago, but it's safe, dependable. Boring. Donna, ever the bookish librarian, spends much of her spare time playing computer puzzle and word games in the internet. Paul's work as a rocket scientist in the military weapons industry requires that his computer remain safe and virus free. State secrets are at stake. That's why his lovely, but sometimes naughty wife is forbidden from playing her games on it.
Ignoring his instructions once too often, the inevitable happens and she infects his computer with an internet virus. Realizing the depth of her mistake, she is willing to do almost anything to atone for her sins and accepts that she will receive an old fashioned spanking as punishment. Much to her surprise, despite the pain, she finds the whole ritual exciting, awakening feelings that have lay dormant for years and arousing her to such a point that she craves more. She confides in her best friend, Peta, and is shocked by Peta’s in depth understanding of the benefits of erotic pain and punishment. Peta consults with Paul and then puts into motion a chain of events destined to change forever the tenor of Paul and Donna’s lives.
DISCLAIMER: This story contains the spanking of adults, elements of bondage, discipline and power exchange. If these activities are not to your taste, you are advised not to buy this book.
Excerpt:
I heard him arrive but was still a little startled when he stormed through the door. It was most unlike him but his demeanor simply proved what I’d already suspected. “You’re home early,” I said, failing to mask the nervousness in my voice.
“Bad day at work,” he replied.
I said nothing, which was most unusual.
“Don’t you want to know why?”
“Um, er, ah, sure,” I replied with faux brightness.
“Computer got trashed, hit by a software virus,” he said, watching me closely.
My body language told him all he needed to know but still I remained mute. I felt the color drain from my face and my legs clenched tightly together, my whole body tensed, as I looked away. I was afraid my legs would give way if I kept eye contact with him.
“We might have lost a couple of months’ worth of data. We won’t know until the analysts manage to go through it all and see what they can recover, if anything.”
I knew my look was of unmitigated fear as the ramifications dawned on me and it was all I could do to stop myself from bursting into tears. It wouldn’t have been to gain sympathy but I could see that I’d hurt my man. “D… don’t you have b… backups, you know, recovery disks or tapes or something?”
“Yes, of course we do,” he snapped, more harshly than usual. “That’s not the point. We’re not supposed to be corrupted in the first place.”
He glared at me, trying to maintain control of himself. I knew that he knew and it was his turn to remain silent. I was glad he did because I feared what he might say if he spoke. My bottom lip was quivering. I couldn’t control it any longer. I burst into tears. “I’m so sorry,” I sobbed. “It was all my fault. I was on the computer playing a game when I clicked on a link.” He glared at me and I looked away.
“Tell me,” he demanded.
“Nothing happened at first but later I noticed the computer behaving strangely. I re-booted it, hoping the virus software would deal with the issue, if there was an issue. I thought it had been fixed. I was too scared to tell you.”
“So you were willing to risk, who knows the value of my work, because you were scared? I don’t fucking believe it. You really deserve to go over my knee.”
“I do,” I sobbed. “I promise I will never do it again. I will take whatever punishment you think I deserve,” I said without even realizing what I was saying.
His hands were at his sides, his fists clenched as he struggled to control his temper. I had never seen him so upset and, for a second, I feared what he might do. He had never hit me before but this was a level of fury I’d never seen from him.
“I’m going out. I’ll deal with you later.” He turned and stormed out, slamming the door behind him.
About Jessica Brand

Jessica was born in Melbourne, Australia in 1958. Having lived in many parts of Australia and overseas, she now resides in Sydney and writes for fun.

With a lifelong interest in her subject matter she finally decided to put some of her experiences and fantasies into words, toning them down somewhat for public consumption. Her first book was released in mid 2014, using the pseudonym of R. R. Greaves. This was followed by a new release in Feb 2015 and there are a number of new stories in different stages of production.