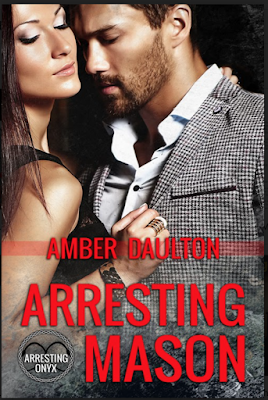 Their chance encounter resulted in a steamy affair,
but will his former gang and a parole officer tear them apart?

I'm happy to have Amber Daulton her at the Reading Room today. This book sounds like a good one!

Once you’re in a prison gang, you’re in it for life. That’s what Mason Harding thought until the boss accepted his resignation. After the State releases him on parole, a sexy divorcée behind the wheel of a car almost ends his life quicker than a shank. His chance encounter with Mia Eddison results in a night of passion, but her brother—his parole officer—catches them together and doesn’t approve.
Mia falls hard for the cocky ex-con, but not because of his chiseled body. She vows to break through his walls and discover his secrets, but never expects those secrets to threaten her life.
When members of an organized crime ring kidnap Mia to force Mason’s return to the gang, he goes up against an old friend to save the woman he loves. Will his sacrifice be enough or will everything fall apart in a blaze of gunfire?

Mia scowled at her brother as he headed up the stairwell, and she used her body to block his entrance into her home.
Jim didn’t seem to notice her tense body language and pushed her aside to enter. “Good morning.” He hugged her with one arm and frowned at the hardwoods. “There’s something sticky on the floor.” He scraped his shoes over it a few times and headed toward the kitchen. “What’s for breakfast?”
“Why are you here?” Mia shut the door, grabbed the towel she’d left on the sofa, and used it to cover the evidence of her desire on the floor. The last thing she needed was for her brother to realize what that sticky substance was. Her gaze darted toward the telephone and answering machine combo in the living room and back to Jim as he picked up the pancake mix. The U-shaped kitchen occupied one half of the loft’s airy floor plan, and she could see into the kitchen through a gap between the upper and lower cabinets. “You know to call first. I don’t have any messages on the machine, and I doubt you called my cell phone.”
“I’m in the neighborhood to see a parolee for an unexpected visit—well, unexpected for him—but I thought I’d stop by to see you first.” Jim sat the box aside and opened the fridge door. “You have any more blueberry muffins?”
“No, you cleaned me out the last time you showed up unannounced.” She crossed her arms and glanced at the closed bedroom door. “Jim, you need to leave.” She’d rather shave her legs without aloe-infused shaving cream or live a whole month without a hairdryer than introduce her parole officer brother to her parolee—boyfriend, perhaps?—the day after the best sex of her life. Talk about awkward.
“What’s the rush? I haven’t seen you in a few days.” He grabbed an apple from the bowl on the counter and rubbed it on his polo shirt to shine the fruit before he sank his teeth in. “Why are you so uppity?”
“I’m in a bathrobe, Jim, and you’re irritating the crap out of me. I have plans today and need to get going.”
“I bought you that robe for Christmas last year. It’s nice to know you use it.” He glanced at the food on the marble countertop. “Looks to me like you were about to fix breakfast. Pancakes are fine since you’re out of muffins.”
Her blood pressure rose. She wrapped her hand around Jim’s arm and dragged him out of the kitchen as a noise resonated from the bedroom.
“Wait a minute. What was that?”
“Just rats. Come on.” Mia jerked on his arm again, but he refused to budge.
Jim shook off her hand, took a step toward the bedroom, and stilled. “Oh God, there’s a man in there. No wonder you want me to leave.” He scowled at the splotches on her neck as though he just noticed them. “That’s very professional. What will all those snooty ladies say tomorrow after you open the store?”
She clasped her neck. “Leave, Jim. I don’t want you to ruin this.”
“Fine, I’ll go.” He patted the gun he always wore beneath his loose blazer. “Don’t worry. I won’t have a problem with him as long as he’s not Evan.”
She doubted that. Evan was blond, gorgeous, and an up-and-coming photographer with a great body. Jim hated him on sight. Mason, a tattooed ex-con who worked at a garage, wouldn’t stand a chance unless Mia buttered Jim up first.
“Just to be sure.” Mia grabbed her brother’s arm again. “We can meet for lunch tomorrow and I’ll tell you about him.” A door creaked open behind her, and she whipped her gaze toward the bedroom just as Jim did.
Mason paused in the doorway, dressed in his jeans and wrinkled dress shirt. The shirt hung open and revealed his sexy snake tattoo. His eyes widened like saucers.
“What the hell?” Jim dropped the apple on the floor and jerked free from Mia’s hold. A dark glower morphed his face into a mask of anger, and he leveled that hate-ridden stare on her new lover. “Mason Harding. What the fuck are you doing here?”
Mason folded his arms across his chest and leaned against the doorframe. His lips sealed together in a thin line as his right cheek twitched. Tension palpitated so strong between the men she feared the windows and light bulbs would shatter at any moment.
“How do you know him, Jim?” Mia swiped damp strands of hair behind her ears, a little afraid to know the answer.
Her brother spun toward her and fisted his hands. “He’s one of my parolees.”
Oh God, no. She covered her mouth with her hands. I’m gonna throw up.

Amber Daulton is the author of the romantic-suspense series Arresting Onyx and several standalone novellas. Her books are published through The Wild Rose Press and Books to Go Now, and are available in ebook, print on demand, audio, and foreign language formats.
She lives in North Carolina with her husband and demanding cats. Feel free to visit her at http://www.amberdaultonauthor.blogspot.com.