A book you don't want to miss - by Leigh Smith 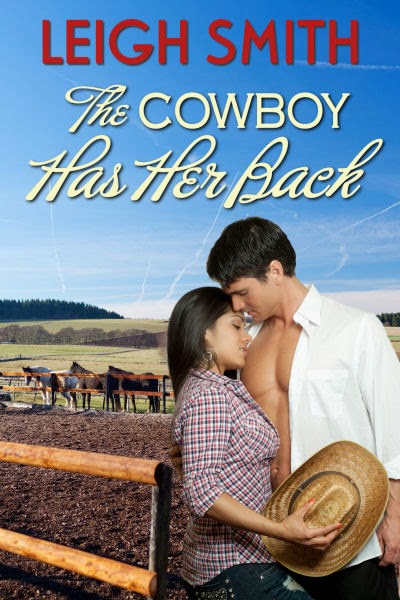 After her Navy SEAL husband is killed by a drunk driver, widowed Mikela ‘Mickey’ Chandler comes to stay with her brother-in-law and sister, Becky.  While out riding, her horse takes off at breakneck speed and Mickey loses her grip on one of the reins.  Fortunately, for her, local rancher Hank Caldwell is on hand to save the day…and the two embark on a passionate and stormy relationship.

It’s not long before Mickey falls head over heels in love with the tall, handsome rancher, but having been hurt in a previous relationship, Hank is guarded and cautious where his feelings are concerned.  There are other problems too, in that Hank is used to being in control while Mickey is an independent woman in charge of her life.  Their relationship teeters on the edge as the two fight for control.

Are they too stubborn and set in their ways to make things work, or will love find a way.

Mickey told Hank to choose the spot.  He picked Rowdy’s Roadhouse, a restaurant on the outskirts of Williston and made famous by regular appearances of Rowdy’s Rangers, a Texas band now famous but discovered at the restaurant by an affluent patron.  Since then, whenever the band was on tour and in the approximate area, they made it a point to drop in and play a set or two. Rowdy’s was a popular place and there was quite a line  waiting for a table when they arrived. Luckily for them, many of the waiting patrons were large parties and they moved up the list quickly since there was just the two of them.

Mickey had pumped her sister for any information on Hank, but she didn’t learn much. Becky said he had only returned to Williston and let it go at that.  Apparently, the Circle C was one of the biggest and most successful ranches in the area.  In addition to cattle and horses, their holdings included vineyards and almond orchards.  Hank had a couple of brothers and a sister and both brothers worked on the ranch.  His sister married an attorney and moved to Washington DC.  His parents, were still involved in the running of the ranch but based on the gossip around town were gradually turning it over to their sons, Hank, Dave and Randy.

Hank and Mickey weren’t sitting at the table long before people started stopping by. All of them welcomed him home; and expressed their hope he stayed this time.  If people ever stopped coming by the table, she planned on finding out more about Hank Caldwell.  With his tousled sandy blonde hair, bronzed skin and bright blue eyes, fine lines crinkling the edges of his eyes and mouth, he was good looking enough to be an actor or model. He was a man comfortable in his own skin and used to being in command, and it showed. Dressed in dark blue jeans, sharply creased but soft looking and weathered, a checked long sleeved shirt and well-worn boots that were clean and polished, he was one handsome cowboy and she was sure he set many a heart aflutter, hers among them.  The steady stream of greeters slowed down and she was just about to ask him about himself when another couple plopped themselves down in the seat on the other side of their booth.

“What are you doing here, this is most unusual for you?” the man said to Hank. Mickey took a good look at Dave and could see a resemblance but Hank was the winner. “Mickey is taking me to dinner for saving her ass this afternoon.”

“Mickey, meet my brother Dave and this is his, ‘what are you Dani, his lover, friend, mistress, wife; what other labels might there be?’”

“No need for such sarcasm or meanness, Hank” she purred at him.

“I see not much has changed,” Dave said to Hank. Mickey was surprised that Dave took Hank’s disparaging remarks about Dani so well, she half expected fisticuffs to break out at any moment.

“Oh, a lot has changed.  She’s with you now and I only wish you the best of luck and hope to hell you never have to leave town, because we have one more brother.”

“You came and sat down here, so if you don’t want to hear anymore, then I suggest you find yourself another table.”

Dave gave Dani a slight push out of the booth.  As they walked away, Mickey spoke to Hank.  “It’s none of my business, but I have to ask.  I can guess, but what the hell was that all about?”

‘You’re right Mickey,  I don’t mean to be rude, but I don’t want to ruin what’s left of the evening by hashing through things better left untouched. Maybe if we ever get to know each other better, I’ll explain.”

“Okay, but before they popped in, I wanted to ask what brought you back to Williston and what took you away in the first place.  If the two things are tied together, I’ll understand if you don’t want to go there.”

“They are and they aren’t.”

“I left because when I was in college I was recruited by Homeland Security.  My college major was criminal justice and after September 11th I was all gung ho to go out and protect my country.  When HS came on campus, they offered me a chance to use my education and satisfy my passion; I took them up on their offer.  So, to answer your question, I worked for Homeland Security.  I’m not active right now.”

“So are you back in Williston to stay?”

“I’m in Williston.  Life changes on a dime and in HS I learned to live one day at a time, that’s what I’m doing.  So enough about me, let’s talk about you.”

“Shall I start at birth and just go forward or is there a particular place you want me to start?”

“A smart mouth, I should have guessed from earlier today.  Start anywhere you like?”

“I told you earlier my sister Becky had twins and I came to help. Once the twins were on a regular schedule, I was beginning to feel underfoot but the holidays were on the horizon,  and she asked me to stay through them at least.  It didn’t take much convincing, spending the holidays with loved ones or alone. I find I’m ready for a change and want to be closer to family. Becky said the district is looking for teachers so I’ve decided to apply for a position. Back in San Diego, there are too many memories around every corner.  I’m a widow.  My husband was a Navy Seal that, believe it or not, was not killed in the line of duty but by a drunk driver. Barry returned from a mission and was on his way home when it happened.  They haven’t found the driver, and I doubt they ever will.  It occurred about 2:30 am, and no one has come forward with any information.  It’s been two years, so I don’t hold out any hope.  It doesn't matter though, it will not bring Barry back.  Anyway, it’s time for a change.  Becky is my only sibling so living close to her and my nieces makes this the logical place to settle.”

“So if you get the job, you’ll settle here in Williston, or at least in the area?”

“Teaching job or not, I’ll settle here.  With Barry’s pension, I don’t have any financial worries.  I still have loose ends in Southern California but nothing that will keep me there for long.”

Cowboys and westerns are my favorite genre, however my characters, although fantasy, are sometimes based on people I've come across in my lifetime.  Truth can be stranger than fiction and although the stories are fantasy, once in a while there is a kernal of real lease embedded in the situations.

If the story doesn't contain a happy ending, it is left open ended for the reader to come to their own conclusions.

That's the great thing about fiction, it can be whatever you want it to be.