Chosen by the High Judge
by Jaye Peaches 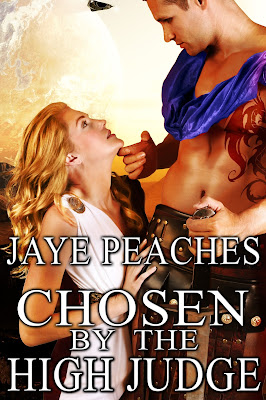 Sentenced to an ancient ordeal,Zara must pay for her naughtiness
with judicial spankings.

I’m back today with Jaye Peaches – one of my favorite authors. I haven’t read this yet, but I love the blurb and the excerpt. I’ll be reading soon.

After twenty-year-old Zara Webb is arrested for delinquent behavior while living as an exchange student in an alien colony, she is placed into the custody of High Judge Galen Hosta. For the duration of her sentence, she will live in Galen’s home and under his authority, and the stern, handsome warrior will have the right not only to punish her in any way he sees fit, but also to take her to his bed and enjoy her beautiful body in any way he pleases.

Within moments of her sentence being pronounced, Zara finds herself over Galen’s lap for a painful, embarrassing bare-bottom spanking. But when she kneels at his feet, blushing crimson as she is made to thank him for her well-deserved punishment in the most humiliating way possible, she cannot hide her helpless arousal.

Over the coming days, Zara discovers that Galen’s mastery of her body will be far more thorough than she would have thought possible, yet even as she is brought to one intense, shameful climax after another, her need for him only grows stronger. But when her sentence is complete and she is no longer his prisoner, will she choose to stay by his side as his mate?

Publisher’s Note: Chosen by the High Judge is a stand-alone book set in the same world as Chosen by the Governor. It includes spankings and sexual scenes. If such material offends you, please don’t buy this book.

“You’re a prisoner. You will earn my trust. If you behave, then I shall reward you with greater liberties. The first test is to take down your pants and bend over my lap. Now!”
Her mouth hung open for a few seconds. “But… but why?”
“Your ass needs tempering. And, I want to punish it.” He touched the back of the chair as if to claim it. “It’s time you took responsibility for the trouble you’re in, or have you forgotten what a naughty human you’ve been?”
The reprimand was the sort of silly thing her father might say to her when she’d done something wrong—naughty girl, Zara. Except when Galen said the words, they didn’t sound the slightest bit silly. He’d given them an edge, a hardness in his tone that made her pulse race and her skin tingle.
He pulled her to her feet. Before she could protest, he sat on the chair, drew her down and over his lap, and began to pull down her waistband. He dragged her pants down to her knees and as she wriggled, he did the same to her panties. No cool rush of air hit her skin; she was too hot to feel anything remotely refreshing. She clenched her ass cheeks tight together and went rigid.
Was this any less humiliating than being tied to a post and whipped while the world watched on? Probably, it certainly felt that way.
The smack of his hand on her ass caused her to jump up, so he grabbed her arm and pinned it behind her back, then hooked his leg over hers, preventing her from rising up. The next smack drove her deeper onto his lap until she felt the hard muscles of his thighs.
She squawked as he continued to switch from one buttock to another at a rapid pace and the noise echoed around his office in a horrible way, as if her bottom had been turned into a drum set.
“Oh, ow, ow!” she howled, feeling each slap meet her tense cheeks. She knew she should try to calm down, but she couldn’t. The more she battled against him, the harder his hand came down and the worse it felt.
She’d never been spanked before. It wasn’t horrendously painful or even agonizing, but it still damn well hurt. She tried to twist her bottom to one side, but he’d locked her in place with his firm grip.
“Keep still, little human,” he commanded and rained down a few more smacks.
Little human!
What an insulting remark—it made her sound weak. She humped his lap in protest and drummed her toes on the floor. Her panties joined her pants around her ankles. Now her legs were completely bare.
“You will learn to keep still or these spankings will last longer,” Galen said.