Welcome to a special Saturday Spankings! My newest book, Educating Jenny will be out by next weekend (Amazon willing) and today I’m sharing the first excerpt from the new book. This is the third in the Cal’s Law series.  Each is a stand-alone book, but if you like knowing everything from the beginning you can begin with Cal’s Law and then Becoming Family.


I know I’m cheating horribly on the eight-sentence rule, but it is your first taste! 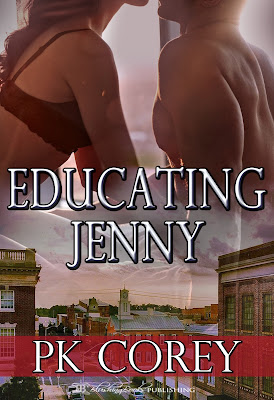 
Cal’s young wife, Jenny, just wants to play house with her gorgeous, dominant husband, Sheriff Cal Bennett of Beaufort County. Cal wants her to complete one more year of college before choosing a path.  Although Jenny is tired of school, she bends to her husband’s wishes and goes off to classes in a nearby city.  On their precious days together, Cal educates his beautiful girl to the idea of sexual fantasies and bedroom toys, and here, Jenny is an eager student!


Jenny finds herself being stalked by a mysterious police officer who views every move she makes as criminal. Everyone she cares about knows that what ensues is not Jenny’s doing, but she can’t keep herself from giving in to some sweet revenge. Her plan starts out as a silly college girl prank, but soon lands her on the wrong side of Cal’s law.


“I know you want to talk about this college thing some more. It’s stressing me out too. I’m willing to talk about it, but it might lead to a fight. So, let’s go to the bedroom for a little playtime to get us both in a good mood first. College can’t be mentioned until we come back in here, agree?”


Jenny watched Cal’s face break into a dazzling smile. “I agree. And woman, I like the way you handle stressful situations.”


“I think you’re going to like the way I handle lots of things,” Jenny assured him.


In the bedroom, Jenny began unbuttoning his shirt. The hardness of his body always impressed her and she slowly rubbed her hand over his six-pack. She undid his belt and lowered his zipper. Putting her hands inside his pants, she lowered his jeans and underwear continuing to push them down until she was on her knees.


“While I’m in the neighborhood,” she murmured. She put her mouth to his balls and gently sucked one into her mouth. Cal gasped with surprise and delight. She continued the treatment while gently stroking his erection. Jenny got to her feet. “Just a preview,” she told him, standing up.


Cal began undressing her. He loved this and he took his time. He loved every inch of her body, and many parts he chose to savor with both his eyes and his mouth. Now nude, Jenny stepped back. “On the bed,” she ordered him, “on your stomach.”


Jen pointed and didn’t repeat herself. Cal lay down and immediately Jenny climbed over him, reaching for the lotion. “You need a good massage to get rid of all that stress,” she told him. She began smoothing the lotion into his neck and shoulders. Cal loved the feeling of her hands on him as she massaged his back then began on his legs. She worked her way up slowly and then, unable to resist, she landed a hard swat to his beautiful ass.


Cal had turned to grab her wrist, “And you’re not supposed to spank it.” He laughed at her. “Here let me show you how it’s done.” He quickly pulled her across his lap and began with a few hard swats.