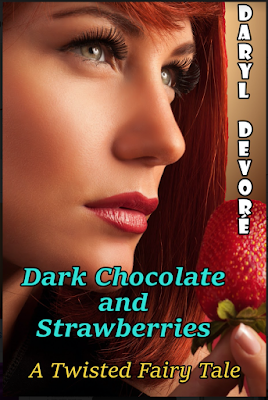 What's a naughty fairy tale like Red Riding Hood without Red, the huntsman, grandma and especially, the big bad wolf?

Esmerelda 'Red' Hood is summoned to her mother's executive suite only to learn her sweet granny is headed for a romantic cruise with a gigolo. Horrified, Red races off to save her grandma before it's too late.

On board, Red meets Andrew Woodsman and Willem Olf. One a cutie with the biggest puppy eyes and the other a dark, sophisticated predator. Her grandmother's warning rings in Red's ear "Never trust a wolf in sheep's clothing."

Even with the warning, Red has trouble choosing which man could be the big bad wolf and which could be her happily ever after.

Swiping the card through the lock, she opened the door when the light turned green. As promised, her luggage had been placed just inside the room. She stepped around the two suitcases, and tossed her shoulder bag and key card on the desk. A page of Wi-Fi instructions rested next to the flat screen TV. Good. I won't be cut off from the real world.

She glanced down at her cellphone. If I check my messages there will only be a coupla dozen from mom asking for updates. Who needs that? She tossed the cell onto the table. She was on vacation – sort of.

Turning around, she continued her exploration. The living room area had a couch with four emerald green throw pillows, two comfortable looking chairs and large seascape hung on the wall, above the couch. A spectacular bouquet sat on the coffee table. Red pulled the little card out of its holder - Compliments of The Emerald Forest.

To the right, were a closet and the bathroom. Walking into the bedroom area, Red jumped on the king-sized bed and sighed. A huge bed. Now if I could get Hot and Sexy in here. Or maybe Mr. I'm-So-Lost. I think I could use a little ship board action and release some pent-up frustration.

Glancing at her watch, she saw she didn't have a lot of time to spare before she was to meet Chopper for lunch. She walked back to the living room to get her luggage, but the view from the balcony stopped her. Sliding the glass door open, she stepped outside. The warm gulf air brushed across her face. We left port? How can a ship this big move and I not notice?

Captivated by the view, Red watched the waves ripple past and the occasional seagull soar overhead. She inhaled the warm air and let the sun shine on her face. A knock at the door brought her out of her reverie. She crossed the room and opened it.

“Hello. Did you forget about lunch?” Chopper asked.

Red glanced at her watch. “Oh, good heavens. I was standing on the balcony. I guess I lost track of the time. Come in. Have a seat. Give me a minute to change.”

Chopper whistled as he entered. “Look at this place. This is great. I've got a closet with a bed in it. You've got a palace. And your own balcony.” He pointed at the glass doors. “May I?”

“Go ahead. I'll only be a second.” Red grabbed the suitcases and hurried to the bedroom. Rifling through the clothes, she found a tank top and a pair of shorts that didn't look too much like she'd packed for the cruise in under fifteen minutes. As she changed, she caught her reflection in the mirror. Gawd, I look like a ghost. I really need a tan. She slipped on a pair of black flip-flops.

When she stepped into the living room, Chopper pointed at the bouquet. “Nice flowers. Boyfriend?”

Red shook her head. “No. They're compliments of the cruise line.” She picked up her purse and key card. “Let's go, I'm starved.”

Inside the elevator, Chopper said, “I have a confession to make.”

“We've known each other for like five minutes, what do you have to confess?”

“I don't exactly know where the restaurant is. We might just end up in the engine room.”

She put her hands on her hips. “Oh, so you're just using me as a tour guide?”

He chucked her under the chin. “I can afford free.”

Red laughed. As the elevator doors opened, she led the way to the small restaurant.

They ordered cheeseburgers, fries and beer, then requested their meal be served on deck. Chopper spotted two unoccupied lounge chairs on the starboard side of the ship, partially in the shade with a view of the ocean, if a person hunched down and looked under the lifeboat.

Tilting his head toward the boats, he said, “I'm glad we found those. I'll be able to find them when the lifeboat drill happens. It's important you know.” His face looked serious.

Red tilted her head. “Why?”

She snickered. “No icebergs in the Caribbean. I think you can relax.”

He pointed at her. “Bermuda Triangle.” 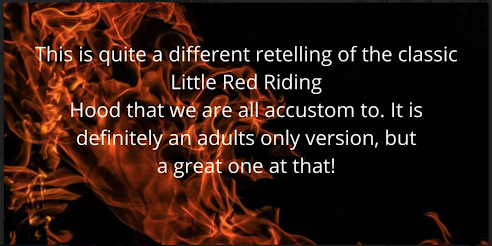