Saturday Spankings - Maybe you should think about this... 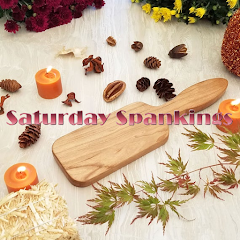 Happy beautiful Saturday! You can’t beat Fall where I live. I want to continue with snippets from the sixth in the Cassie’s Space series, Cassie’s Influence. After seeing Allie in the tiniest of bathing suits, Cassie begins thinking back to a time in her early marriage when Tom didn’t approve of the bathing suit she was wearing at one of the conventions they attended.

Tom told her that while it was beautiful, she was not to wear it out again. However, he said that she was could wear it just for him.  Cassie, in a fury cut the bathing suit into pieces and flung them at him. Tom, totally unfazed, gave her a kiss and returned to his meeting.

That’s when Cassie called Sue to go out with her…

Finally, Sue looked and me and said, "Okay, spill it. What's got you so steamed?"

"Tom didn't like my new bathing suit. He said it was inappropriate for a married woman to wear in public."

"Oh good grief!" Sue moaned. "What's his problem? He's more old-fashioned than my granny. That suit looks great on you. Just wear it and tell him to kiss your ass."

"What! That son-of-a-bitch! He didn't? Cassie, you need to kick his ass to the curb."

Sue was angry. I liked her being mad on my behalf, but I told her I was the one who cut it up. She laughed then. "In that case, good for you. But tell me why in the world, after all that, are you going out to find a bathing suit he'll approve of?"

I turned to give Sue a small smile. "Who says he's going to approve of it?"

Sue howled with laughter. "Ahhh… Cassie, I thought for a minute you'd gone soft on me. There's nothing like spitting in the eye of the Tiger."

Allie and Ryan are both feeling influence from Cassie and Tom. Cassie doesn't mean to lead Allie astray - but Allie sees Cassie as a role model. Every adventure, old or new, captures Allie's attention, which increases her desire to be more like her mentor. But for better or worse, Ryan is just as determined to be like Tom.