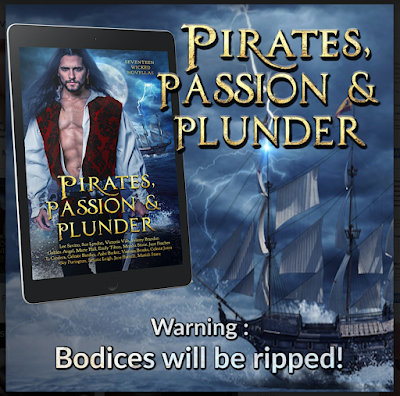 What's a lady to do when she's boarded by ruthless brigands and barbarous buccaneers, kidnapped on the lawless High Seas?
Stripped to the skin by piercing eyes.
Captive and claimed by rough, strong hands.
She knows it's forbidden but how can she resist... a pirate's pleasure.

*Warning : Bodices will be ripped!*

Prepare for hair-raising shenanigans.
Pirates make their own rules.

THE CAPTAIN’S CAPTIVE
by Victoria Vale

THE BLOND DEVIL OF THE SEA
by Celeste Barclay

BOUGHT BY THE BUCCANEER
by Vanessa Brooks

TAKEN BY SIN
by Sky Purington

THE SEA WOLF
by Lee Savino

OWNED BY THE PIRATE
by Sue Lyndon and Celeste Jones

PURSUING HER PIRATE
by Jaye Peaches

HIS STOWAWAY
by Measha Stone

HIS WICKED WAYS
by S. Cinders

CUT AND THRUST
by Simone Leigh

And... to celebrate the launch of this gorgeous festive collection of historical romances, there's $25 of book money to whizz out to one lucky reader. Just click through to enter => http://www.lovebooksdaily.com/featured-read

The Dexterity—designed to be the pride of the King’s navy, is mine.
Or, at least, she should have been, had the scoundrel Edward Law not waltzed into Christy’s auction house and stolen her from right under my nose.
But if Law thinks he can claim what rightfully belongs me to me, then he has another thing coming.

No man can make demands on me, be he gentleman, or otherwise.
I won’t concede to his dark, brooding eyes. I won’t surrender to his iron will.
Edward Law means nothing to me…

Edward smiled. “As you can see, I have news of my own.”
He tilted his head in the direction of Alice, and for an excruciating moment, both men turned and regarded her. Alice’s face burned with embarrassment, and instinctively, she lowered her gaze, her attention falling on the stiff ropes at her wrists.
“A woman, Captain?”
“Very observant, Carlisle,” said Edward with a laugh. “Yes, a stowaway by the name of Alice Jaggers.”
“But a woman, sir,” the other man repeated. “It’s bad luck to have a woman onboard.”
Alice lifted her chin with interest. Bad luck, huh? This could be her way off the vessel altogether.
“Only if you subscribe to superstitions,” countered Law in an amused tone. “Which as you know, I do not. It is not luck that has brought us good fortune in the past but our own fortitude.”
Carlisle raised his brows but said nothing to protest. “How did she get on board, sir? And what are we to do with her?”
Alice’s belly twisted at the last question, her gaze darting once more to Edward Law. Until today, he was a man she had barely even contemplated—the man at the auction, a name on a list at Christie’s, but nothing more. Now, it seemed Mr. Law held Alice’s destiny in his hands, and she was heady with the new reality.
“I found her hidden in my quarters,” explained Edward as he turned to face Alice. “As for your second query, Carlisle, weare not going to do anything with her. As captain, our guest is my responsibility.”
She gulped at the way he made that sound, suddenly unsure if she should be grateful or afraid—worse was the way Alice’s body was reacting to the tattered captain. Where she had previously been disgusted by the sight of the man, she was fast becoming compelled. The weight of his stare and his authoritative presence had affected Alice in ways she could never have foreseen, and as she met his gaze again, she was perturbed by the way heat pooled beneath her gown.
“I should like you to stand guard outside my door while I address the crew.” Edward’s focus was back on Carlisle now. “I am sure you can understand I cannot have any of the men stumbling upon her by mistake.”
Carlisle turned to look at Alice, his brown eyes drilling into her. “Aye, sir,” he responded after a moment. “I can understand.”
Law moved toward him, resting his hand on the shorter man’s shoulder. “I would trust only you with this objective, my friend,” he said solemnly. “Keep her safe for me.”
“You can count on me, Captain,” Carlisle smiled, revealing two crooked front teeth.
“Good. Then I must depart.” Law turned in Alice’s direction, fixing her with a hard stare. “I shall not be long, but until that time, behave yourself.”
Alice pulled in a deep breath as both men stalked from the room. She watched as the door slammed closed behind them, imagining Carlisle waiting just beyond. A potent myriad of emotions stirred as she heard what she assumed to be Law’s boots pacing away.
No man had ever spoken to her that way. Even her father had treated his only daughter with courtesy and respect when he addressed her.
Alice blinked, shaking her head as she processed what she was feeling.
On the one hand, she was embarrassed at her current predicament, entirely of her own making, and no idea how it would be reconciled, but on the other hand, she was seething with indignation at the way she had been treated. The way Law had spoken to her—dressing her down like a servant. Her face flamed as she recalled his proximity and the way he had touched her—the nerve of the man—then had somehow made her admit the error of her ways aloud. That was a feat no one had achieved before. Alice may have been guilty, but she would never have admitted such, especially to a stranger.
She sighed, eyeing the captain’s quarters as she struggled against the ropes. Being bound this way was intolerable—just like Law’s insufferable arrogance and the way he made assumptions about Alice. He assumed she would obey him and would be pliant to his plans. She snorted—the man had a lot to learn about Alice Jaggers if he thought she would remain compliant. She had not sneaked her way on board just to end up his bound captive, yet even as resentment burned in her blood, there was also something else. His commanding presence, just like the bondage, had stirred something in Alice.
Something she had not expected.
Something that felt like desire.