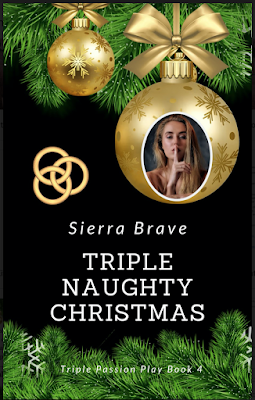 Two husbands, four kids, a gaggle of nosy neighbors, a car accident, the best present ever, a naughty party, and a mother-in-law expected for Christmas. How will Trisha ever pull it off?

Blurb
Navigating the Yuletide season can be a challenge for anyone but after hosting their family Christmas celebration for more than fifteen years, forty-something mom, Trisha Marks-Davidson, believes she’s conquered Santa and tamed all of his reindeer. Anything but ordinary, Trisha’s family of seven consists of herself, her two husbands, Tommy and Ken, and their four kids. Despite their unusual situation, she’s cultivated a system for a fun-filled holiday packed with their own special traditions.
Trisha, Tommy, and Ken are pleased with the quiet, comfortable life they’ve built together but are disturbed to learn the novelty of their three-way union still hasn’t worn off for some members of their community even after nearly two decades. A last-minute decision to attend a neighborhood Christmas party could be the trio’s undoing. The opportunity to set the record straight is there for the taking but actions speak louder than words and temptation is all around them.

Excerpt
“Whoa, cowboy, just where do you think you are going on Christmas Eve?” Trisha grabbed Ken around the waist while spearing him with a glare fierce enough to hold him in place as if he were a butterfly pinned to a 4-H, spreading board.
“Calm down, I’ll be back. I just have to run by the office.” As Ken held his hand in place on his head, Trisha noticed the touch of gray budding around his ears, the only indication he was a day over twenty-five. She examined his wrinkle-free face and sighed—regardless of his beauty, she wouldn’t let him get away with skipping out on family time.
“No, no, no, the office is closed! If you have to work on a holiday, at least do it from your home office.” Her bottom lip pushed upward, pressing against the top one and progressing towards a full pout.
Tommy rushed to his best friend’s rescue. “Geez, don’t do that to the poor guy. No one can argue with that face. It’s too cute.”
“Beware the pout.” Ken agreed with a nod.
Her nostrils flaring, she sulked, folding her arms across her chest as she turned her ire on Thomas. “So. you think it is okay for him to run out to work and leave us?”
“I’m sure Ken has a good reason for abandoning us.” Tommy lifted and lowered his eyebrows mischievously at Ken.
“Weak, Tommy…seriously weak…Thanks for having my back.” Ken’s lips pinched together as he stared at his husband. “I need to go get something I forgot.”
“I think you forgot it’s Christmas. What could be so important it can’t wait until after the holiday is over?” Trisha cleared a dish off the counter, keeping her eyes down while aggressively scrubbing the Formica with a damp sponge. “We’re supposed to bake treats and go see a movie. It’s our tradition.”
While turning his back to the kids and facing her, Ken nudged her arm until he got her to look at him. He widened his eyes, lifting his eyebrows high up his forehead. “I dunno, Trish. What do you think couldn’t wait until after Christmas?”
Her spine snapped straight and she pushed her shoulders back as his use of the word “dunno” caught her attention. Ken knew every damn thing, and if he didn’t, he sure as hell wouldn’t admit it. Getting the hint, she closed her eyes and shook her head as she remembered Ken had hidden a dragon’s horde of presents for the kids in the coat closet of his office. I’m a total jackass. She mouthed, “Sorry,” before anchoring a kiss onto Ken’s pink lips. He cupped the side of her face and pushed into the smooch, ignoring the retching sound effects coming from his children.
After separating, he pressed another peck against Trisha’s forehead before threatening, “You guys better cut it out or I’ll give your daddy an even longer good-bye lip-lock.”
While holding his hands up in a halting stance, Todd’s face filled with pained annoyance rather than true disgust. “That’s it. I’m out. If there is anything worse than seeing your papa kiss your mom, it has to be watching him kiss your dad! Peace!” He stuck out his index and middle fingers and folded down the other two and his thumb to make the sign before jumping off his stool and striding out the laughter-filled room. 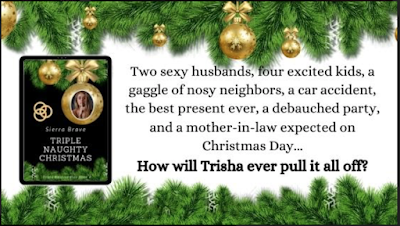 Other books in the Triple Passion Play series: Can love between three survive?
Rock You Like a Hurricane
The Power of Three
Baby Makes Four