BJ Wane - Submitting to the Cattleman

Submitting to the Cattleman
BJ Wane 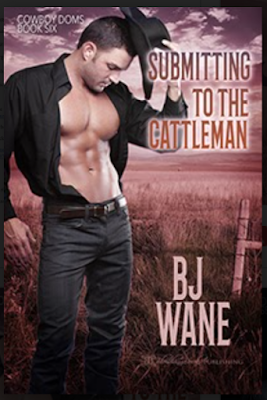 BLURB:
Why does doing the right thing have to be so hard?
Leslie Collins has been asking herself that question ever since her eye-witness testimony in a murder case landed her in the Witness Protection Program far away from everything and everyone she’s ever known. Now, four years later, she struggles with growing despondency over the circumstances that prevent her from forming a relationship. When she allows her loneliness to get the better of her and indulges in a one-night stand, she never dreams her stranger will show up again at the private club she’s stayed away from for a few weeks.
Kurt Wilcox returns home to Montana to help his father recover from a stroke and hopefully mend the rift between them. He doesn’t plan on rescuing a woman from a mugging and ending up succumbing to the loneliness reflected on her face and indulging in a one-night stand. When he meets up with Leslie at his club, he refuses to let her hide her identity or her reasons for inviting a stranger into her home and bed.
Leslie finally caves to his persistence and agrees to an affair that seems promising until she learns her identity has been comprised and an attempt on her life forces out the truth about her past. Will putting her trust in her Dom jeopardize him and his employees when she agrees to his protection, or will Kurt rid her of the threat against her, as he promises, leaving her free to embrace her own HEA?
This is book six in the Cowboy Doms series but can be enjoyed as a standalone.
Publisher’s Note: This contemporary, western romance contains elements of mystery, suspense, danger, power exchange, BDSM, and sensual scenes. If any of these bother you, please do not purchase.

Excerpt:
Kurt reached the loft and spotted Leslie bound on the St. Andrew’s Cross right away. As he eyed her slim, bare back, spread legs and white, soft ass, he didn’t know who to be pissed at the most, her or his dad. He shouldn’t have let Leland goad him into an argument right before he’d left. If the stubborn coot didn’t want to go to therapy or work at getting back on his feet, Kurt ought to leave him alone to stew in the misery of his own making. The problem was, he cared too much to do that, just as his strong feelings for Leslie wouldn’t allow him to give up on her regardless of her continued obstinance. Maybe, if those glimpses of a desperate, lonely ache reflected on her face weren’t continuing to wreak havoc with his conscience, starting with the first time she’d looked up at him, he would find it easy to wash his hands of her and walk away.
Between wanting to solve the mystery of her solitary life and the driving lust to fuck her in every way possible, he wasn’t about to let this little rebellion deter him from his goals. Mitchell flicked him a questioning look as he approached, checking the tightness of the ankle cuffs before rising to greet him.
“Kurt. I hope your scowl isn’t because of something I’ve done.”
“No, in fact I’d like to thank you for preparing my sub for me.” Leslie’s muscles tightened under Kurt’s hand as he caressed her clenching buttocks.
Mitchell’s eyes darkened, his gaze cutting toward Leslie. Fisting a hand in her long hair, he pulled, lifting her head. “Is this true, you’re with Master Kurt?”
She bit her lip, both men noticing the guilt swirling in her eyes as she looked from one to the other before her trembling mouth went taut and she replied with a thread of defiance coloring her tone. “We never agreed to be exclusive.”
Kurt winged one brow upward and crossed his arms over his chest. “I don’t share. In case I neglected to mention that, now you know.”
Moving back, a hint of amusement crept into Mitchell’s expression. “I’ll step aside and let you two work this out. Leslie, look me up if you decide to ditch Master Kurt again.”
Kurt waited until Mitchell walked away before leaning against Leslie’s back, loosely circling her neck with his hands and whispering in her ear, “Don’t you think you should have told me before you accepted another Dom’s invitation?”
“I didn’t think it would matter.”
A slight tremor ran through her body as he tightened his hands on her throat, just enough to remind her of his control, and what she’d agreed to. “Once again, you thought wrong, and you’re not being completely honest. You’d rather back away than risk revealing more about yourself, like you did last night.”
She tried to turn her head to look at him then released her breath in a huff when his hold wouldn’t allow it. Her throat worked under his hands as she swallowed and said, “You have no right to pry.”
Now it was his turn to sigh with exasperation because, damn it, she was right. Stepping back, he ran his hands over her shoulders, down her arched back and palmed her buttocks. “You’re right about that, but not about how you let me know you weren’t happy with me.” Digging his fingers into the soft globes, his thumbs slipped between the fleshy mounds to tease the sensitive area. “I’m disappointed you would resort to such a tactic instead of talking to me. Five swats with my belt or say red and we’re done. What will it be?”
Leslie couldn’t think straight, not with Master Kurt’s hands on her, the displeasure in his deep voice filling her with guilt and regret. She’d been a fool. What made her believe she could simply walk away from him now when she couldn’t forget him after one night together? Now she found herself torn between her ever-growing need for one man and her determination to ensure no one else would come to harm because of their association with her.
She heard the slide of his belt as he removed it and quaked inside. Goosebumps popped up across her backside as he trailed the supple leather over her flesh. To this day she didn’t understand how an aching, hot butt could calm her rioting emotions while drawing tears of discomfort, or how the hurt could eventually morph into pleasure. But there was no denying her body sang in tune to the silent threat, warmed to the promise of blissful pain and the pleasure induced forgetfulness it could lead to. If he allowed it.
Kurt reached around and cupped one breast before pinching her nipple. “Give me your answer, Leslie.”
Need won out over good intentions and she succumbed to the pull of that deep, commanding tone. For the first time in almost four years, she didn’t want to think in terms of ‘what if’, instead, opting for ‘why not’. “I’ll take the swats, Sir.” 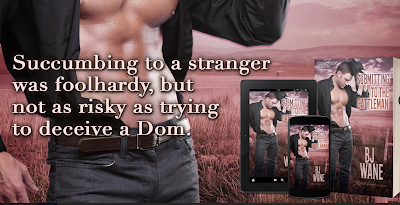 AUTHOR BIO:
I live in the Midwest with my husband and our dog, a lovable Great Pyrenees/Standard Poodle.  I love dogs, enjoy spending time with my daughter, babysitting dogs and kids, reading and working puzzles.  We have traveled extensively throughout the states, Canada and just once overseas, but I now prefer being a homebody.  I worked for a while writing articles for a local magazine but soon found my interest in writing for myself peaking. My first book was strictly spanking erotica, but I slowly evolved to writing erotic spanking romance with a touch of suspense.  My favorite genre to read is suspense.