Finally, Cassie's Ordeal is up on both Blushing Books and Amazon!

You can read another excerpt over at Donna Steele's blog


Today’s the day – Cassie’s Ordeal will be out sometime today. I wanted to give you the blurb and a short excerpt. I also wanted to let you know that the first book, Cassie’s Space is now on sale for .99 cent. The next two, Cassie’s Tale and Cassie onthe Move are down to $2.99 and the Cassie’s Box Set with the first four books is on sale for $6.99. The Cassie books can be read in any order, but if you feel you’ve gotten to know Cassie and her friends you are really going to need to read this one! 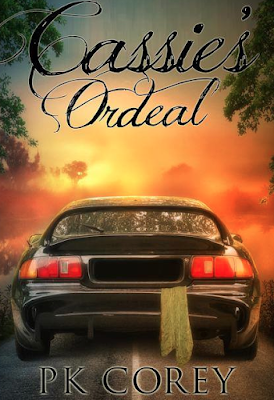 I was out on the deck enjoying the weather and waiting on Sue to join me for coffee. I was standing at the deck railing watching the river as I saw Sue coming along the back path. I smiled as she came across the lawn and gave a small wave. She stopped at the bottom of the steps and gave me a scrutinizing gaze.
“What?” I asked, when she said nothing.
Sue came up on the deck continuing to stare. I was beginning to feel self-conscience when she broke into a big grin.
“You got your butt beat last night!” she announced, obviously pleased with herself.
“I did not!” I told her emphatically. I suppose regardless of how old I get, immediate denial of anything I don’t want to acknowledge will be my first thought.
“The hell you didn’t!” Sue crowed.
I was mad. “Why do you say that?” I snapped. Sue ignored me and went in for her coffee. I was sitting, gingerly, when she returned, still chuckling.
“It’s a good thing Tom cut your gambling career short years ago, because your poker face sucks.”
“I have no idea what you’re talking about,” I snapped.
“Aw, Cassie,” she started, “You haven’t been yourself since the wreck, well at least since we got back from the island. You haven’t talked, you don’t smile like yourself. You’ve been mean and surly. I’m surprised it took old Tom this long to beat it out of you. This is the first morning you’ve looked like you.”
“You’re nuts,” I told her dismissively.
We sat in silence for a while, the Sue quietly asked. “So, did he find out somehow or did you tell him?”
So much for secrets. “I told him,” I admitted glumly. “How did you know, really?” I asked her.
“Seriously, it was the way you looked this morning,” She insisted. “Tom can be a real ass at times, but evidently, for you two, this spanking crap works. You look ten years younger with that guilty secret off your back. You should have told him when it happened.”
I rolled my eyes at her. “And I suppose you tell Steve everything these days?” I asked sarcastically
“Nope, I still keep a secret or two. Difference between you and me is I don’t feel guilty about it.”

Blurb - Cassie’s Ordeal (book 7)
Cassie loves her life on the river with Tom and her friends. She feels Tom has her wrapped in a safe and protected cocoon of love. But her world is jarred when the phone calls begin. Cassie hesitates to tell Tom about them knowing he’ll over react and she will be the one under ‘house arrest’. But when the calls go from annoying to frightening she has no choice. Tom brings in the police to find out who is behind the harassment and make plans to keep Cassie safe, but he’s too late – Cassie is gone without a trace.

The police began an all out search, but there are few clues to go on. Will life on the river ever be the same again?