Love and trust walk hand-in-hand,
but fear can tear them apart. 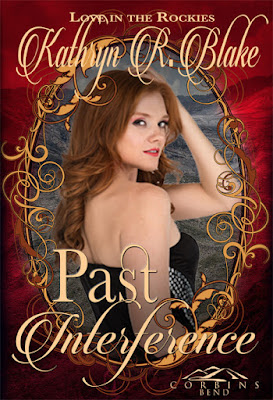 I'm so happy to have Kathryn Blake here today. I've read Past Interference and it is an excellent book. I think this is one you will really like.

When Jerry Douglas asks Elly Benson to marry him, he wants their ceremony to be as close to Valentine's Day as possible. Though Elly tearfully accepts Jerry's proposal without hesitation, as she readies herself for her second wedding, the doubts and misgivings of any new bride-to-be are exacerbated by the abuse she suffered during her first marriage. When Elly recalls how quickly her uncertain stomach jitters grew into tight knots of pain on her wedding day, she also remembers how and why she'd fallen in love with and married Arthur, her first husband. A mistake she regrets more and more with each passing hour.

Though she's lived with Jerry for four months now, and been subject to his discipline more than once, her first husband had been kind and careful with her, too, in the beginning. At least until she vowed to love, honor and obey him. And their move to Corbin's Bend turned him from the strict, but caring husband she thought she'd married into a monster she no longer recognized.

When Elly seeks Jerry out at his vet clinic, but refuses to leave a message when she learns he's with a client, he returns home to check on her.

“What’s wrong?” Jerry asked with a glance at the strewn books before he rose to his feet and centered his gaze directly on her.
Elly groaned. The man was far too perceptive sometimes. “Nothing. I just thought I would drop by and check how you were doing.”
“Uh huh. Care to try that again, sweetheart?”
Her shoulders dropping, Elly confessed, “I think I’m getting another migraine.”
He crossed over and placed the back of his hand against her forehead. “Take anything for it?”
“No. Not yet. It only just started.” Okay, that was a lie, which would get her in even deeper trouble if he found out. She held still beneath his hand, but knew she was flushed, so she suspected he would be escorting her into the bathroom next.
He gave a brisk nod, then grabbed her hand. “Come with me.”
“Jerry,” she protested, but cut off her words with a grimace under his angry glare. Though he didn’t make taking her temperature a punishment, exactly. He did make it an exercise in obedience.
She stood in the bathroom while he retrieved the glass tube, shook it, and then liberally coated it with lubricating jelly. “Pants and panties down, now,” he ordered without looking at her.
With an inner groan, she obeyed and positioned herself over his knees when he sat on the toilet. They’d done this often enough after she’d been released from the hospital last October, so she should be used to it by now, but she never got over the way her former husband had punished her anally. Jerry questioned her almost every time they did this, but she was afraid he would decide an anal plug or a fig of ginger was an excellent way to get his point across, and she didn’t think she could willingly accept either of those punishments again.
She grimaced at the feel of thermometer sliding into her, but remained obedient and compliant. Jerry wasn’t trying to hurt or embarrass her. Not really. He was of the opinion that rectal temperatures were more accurate, so that’s what he used, and while they waited, he stroked her back and bottom to help her relax. Despite her uneasiness, his caresses calmed and centered her until she let out a soft sigh.


“Good girl,” he praised. “You always start out so tense when we do this, and yet you know I won’t hurt you, so I suspect it’s something Arthur did. We’re getting married in less than a week, Elly. Don’t you think it’s time you trusted me enough to tell me the truth?”

Lessons in Love is Kathryn R. Blake's sixth novel with Blushing Books, and fifth spanking romance where Domestic Discipline is primary to the plot.  Although Kathryn is relatively new to the spanking romance market, she is not new to stories where the hero spanks the heroine.  In fact, most of her novels have some sort of spanking in them.  However, even in Kathryn's novels where the hero firmly believes in using spanking as a deterrent, he has no desire to cause the heroine injury and takes no delight in hurting the woman of his heart.  In fact, sometimes he finds it extremely difficult to follow through on his threats or promises.
To date, all of her heroes are dominant, alpha males who are extremely protective of the women they love.  However, part of that protectiveness includes the need for a certain amount of control.  They do not suffer defiance or disobedience lightly. Even so, these men aren't infallible, and they do make mistakes, but love and respect will always triumph in the end.
Kathryn has been a member of RWA since the early 1980s and has joined several local and special interest chapters. Besides writing, Kathryn enjoys traveling, reading, attending the theatre, and is a passionate lover of animals, so much so that in 2015 a stray cat adopted her. The stray now sleeps in Kathryn's bed.  She has also recently taken up the expensive hobby of making and selling jewelry.
Her personal website, www.kathrynrblake.com, is filled with photos and links to information about her many interests as well as peppered with quizzes, contests, games and lots of other fun things to do and she loves to hear from her readers, so she has an e-mail link at the bottom of every page.

Now lets get to know Kathryn just a little better.


Are you working on a new book right now?

What advice would you have for writers who decide to try their hand at erotica?

My first advice would be to read several books in the genre. If you don't enjoy reading the stories, you aren't going to enjoy writing them. So make sure it's a genre pool you feel comfortable playing in.

Is there a message in your novel that you want readers to grasp?

That we should learn from our past mistakes, but not let fear of making another mistake keep us from trying again. If you let fear rule your life, you'll end up stuck and unhappy.
Posted by PK Corey at 8:30 AM