I'm so happy to have Heather Hart here today. She has a hot one here, check it out!


And here it is! My latest romantic roller coaster - offering love, sex, murder, and a pair of villains to drive coffin nails through your heart!


Centered round a true story, London Lady is set in the 1960s. The city is in the grip of fear as two notorious mobster twins make their mark north of the Thames. But they have legitimate businesses too, and driven by need, Claire takes a job in one of their nightclubs as a hostess.

There she meets Bill "Lucky" Underwood. He's their major crime lieutenant, and she knows falling for someone like him is dangerous and stupid. Claire will do anything not to get mixed up in their violent world, but Lucky proves a hard man to say no to.... 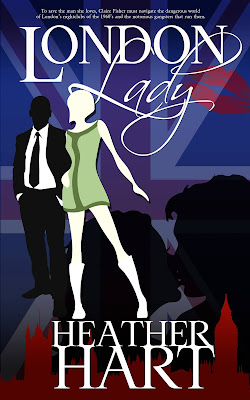 "So why did you come back tonight?"
"To see you."
She laughed. "No really?"
"Really, I mean it. I was watching you all night in the mirror behind Ronnie. When those idiots put their hands on you I saw red. They're lucky they got off as easy as they did. But after they left I got to thinking. What if they came back? What if they waited until we were gone to get their own back? It can happen in my line of work. I see it all the bloody time. In fact, I couldn't stop thinking about it, so here I am."
"My guardian angel?"
"If you like, yeah."
She smiled, and as she stared at the pavement she felt his skin brush hers as he took her hand. She felt him squeeze it, gently. Inside her head told her to let go, to push him away. This life was not for her. This was not what she wanted. Womanizer or no - there was real danger around him; the kind of shit only a fool would get mixed up in. She knew how her uncle was, and the kind of brute he could be. And he was only small potatoes. Lucky here was mixed up with the read deal. And yet every argument she had, every doubt she cradled, every fear she felt; suddenly none of that mattered. He was holding her hand, and God protect her, she was a fool in love.
"I'm sorry," he said.
"Sorry?"
"What I have to offer - well, it's not going to be easy."
"What are you offering?"
"I want you to be my girl. Ever since I met you, I've thought about you - - about us. About how it would be if we were together. Haven't you?"
She kept her eyes lowered, not wanting him to read what was clearly written on her heart. At least, not yet. "Oh Lucky, I've heard so many things. I can't lie to you, I have to say, I'm a little bit afraid of you. All that business with uncle Frankie...."
He pulled her around to a dead halt; his eyes searching hers. "But do you feel anything for me?"
There was no use lying. Face to face like this her eyes betrayed her. She nodded. "I do."
"And you want to be with me, too?"
"I do."
"Then nothing else really matters, does it?"
With some force of will she pushed him away and resumed her walk along the pavement. "If you were any other man I would say that was true, but you're not any other man, are you? You're with the Kray boys. And don't say they're not as bad as the Richardons 'cos I know it's not true. I've heard stories, Lucky, the kind of stuff that gives little kids nightmares. Now I'm not saying I believe any of it, but if it is true... well... I dunno. I'm such an ordinary girl. All I ever wanted was to meet a nice man, get married, maybe have a couple of kids, just like my mum did. In a million years I wouldn't have imagined this. I think a lot about you, I really do, but I'd be lying if I didn't say I was a bit afraid of you, too."
He laughed. "Of me?"
"Yes. You're part of it, aren't you? Oh God, I just don't know, I really don't."
He pulled her to a stop again. There was a solid brick wall along the side of the street and he nudged her gently back toward it. Her heart beat wildly; if anything was true it was that she wanted him to kiss her now, so badly. She'd said her piece, but her body ached for him; for his gentleness, for his cheek, and yes, if she were completely honest with herself, for the danger too. In him they all came together as one; an irresistible, provocative package, and she wanted him more than anything else in the world.
He brushed the back of his knuckles gently along her cheek and as he bent his head to kiss her, her last defense melted away. She loved him. Somehow, in spite of her reason, in spite of his life-style, in spite of everything, she loved him. She would be his, body and soul, and as his lips brushed hers, her heart surrendered completely. She had no choice now, she would take a chance, and as he pulled her into his body she gave herself up to an unknown destiny, one that only fate could decide. She closed her eyes, ignored her fears, and just let it happen.

When she’s not frantically scribbling away she’s a cat worshipper and curry fanatic. If you like what she writes, please feel free to drop her a line at authorheatherhart@gmail[dot]com.