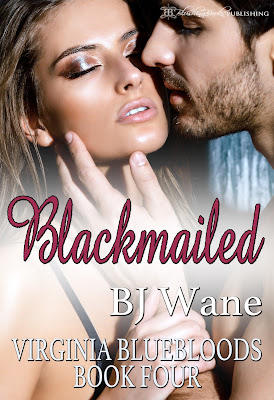 Thank you for having me today, PK.  BLACKMAILED ends my four book Virginia Bluebloods series with Wes’s story.  I’m so thrilled with the success of this series-readers wonderful comments have made the past year of hard work worth every moment!  All four titles can be read as stand-alone books, but, of course, I recommend reading all four!

BLURB:
Charlotte Heffington can no more ignore Wes Montgomery's coercion into a short affair than she could forget the erotic experiences he gave her their one night together.  After several exciting, pleasure-filled trysts, she starts questioning whether she would be able to walk away unscathed and accept the future her cousin has mapped out for her or be left to crave the pleasures only Wes could give her.  When Wes turns on her, she’s finally had enough of others manipulating her life and vows to take control of her future.
Wes swore off relationships after a betrayal left him bitter towards women, but he reluctantly finds himself drawn to a woman who looked completely out of her comfort zone when she walked into a downtown bar one Friday night.  After caving to her inexperienced come-on and his uncharacteristic response, he spends an unforgettable night with her.  A week later, a chance meeting reveals her true identity and he feels taken in all over again.  In a rash move, he blackmails her into an affair that turns the tables on him when he finds himself feeling things for her he’s never felt for another woman.  Hearing she’s engaged shatters his belief in happily ever after again and his angry tirade when he confronts her separates them on a bitter note.
After learning the truth, Wes tries to make amends, but when that fails, he resorts to drastic, pleasurable means to convince her to give him another chance, but will it be enough?
Check out these other titles in the Virginia Blueblood series:  Blindsided, book one, Bind Me To You, book two and Surrender To Me, book three.


DISCLAIMER: This book contains the spanking of adult women, explicit sexual scenes including BSDM. If any of these offend you, please do not purchase this book.

EXCERPT : In this scene, Wes is about to test his feelings for Charlie as he allows others to pleasure her.
He took Charlotte’s breath, and her panic away with his soul stealing mouth.  Within seconds those talented lips had her moaning with the slow rise of renewed lust.  As he pressed his hard body against her, enveloping her in his strength, she barely registered the hands pulling her feet apart, hardly felt the soft cuffs wrapping around her ankles.  It wasn’t until she tried to tighten her spread legs and couldn’t she realized the other two men had bound them between a rod.
She whimpered into his mouth, pressed her naked body even closer to him until the rough denim of his jeans abraded her thighs and bare pubis and his belt buckle bit into her stomach.  His tight clasp of her face kept her secure, helped the panic to recede as he ravaged her mouth over and over, his lips molding hers, his tongue stroking her tongue and everywhere else he could reach.
And then warm breath tickled her ear, teeth nibbled down her arched neck as Wes tilted her head and the other two men shifted closer.  Close enough to touch.  Hands, so many hands, as if an octopus had her in its tentacles, molded, shaped and squeezed the pliant flesh of her breasts and buttocks and everywhere in between.  Pure, uncensored sensation took over, so when Wes released her mouth and asked in that guttural tone she loved so much, “Yes or no, Charlie?” there was only one answer she could give him.  “Yes!” because it would be sheer lunacy to turn down what they were offering her, what they were doing to her, what they were promising her.
“Would you rather be blindfolded?” Wes asked her, her response to Dale and Eli’s hands on her going straight to his already engorged cock.
“No, I-I can close my eyes, if I need to.”
“That’s my girl,” he murmured.  “We’ll take good care of you, baby.”

CONNECT WITH BJ:
https://www.facebook.com/bj.wane
http://bjwane.blogspot.com/
http://www.amazon.com/BJ-Wane/e/B014361LC2/ref=dp_byline_cont_pop_ebooks_1
bjwane@cox.net
Questions
Do you have a specific writing style?
Yes-I include both the male and female character’s points of view when writing, most times in the same scene.  In the ten years I’ve been doing this, I’ve only received 2 negative comments-all other reader & reviewer comments on this style have loved it.
Can you share a little of your current work with us?
The book I just finished-still untitled!- is about a sister determined to find clues to her sister’s disappearance and the sheriff and Scotland Yard detective who don’t want her interfering with their investigation.  Not only can she not resist getting involved, she also can’t resist either of these guys or her response to their means of keeping her line!
Is there anything you find particularly challenging in your writing?
Dialog.  I’m a quiet person by nature-would rather listen than converse-so I struggle with dialog, especially lengthy conversational scenes.
Who is your favorite author and what is it that really strikes you about their work?
Linda Howard-she is so good at blending suspense, romance, humor and hot sex scenes!  I get it all with her books.