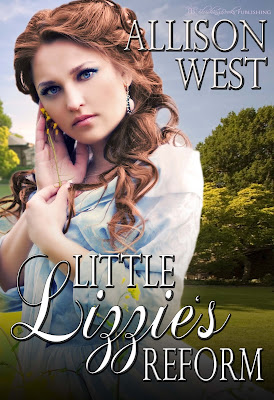 I'm so happy to have Allison West back with me again with another wonderful book. Check this out and all of Allison's great books.

Blurb:
Thomas Montgomery seeks out troubled ladies that are in need of a strict and proper upbringing, encouraging them to join Alton Reform. Discovering Elizabeth Grey alone by the tavern at night, he insists he accompany her on the journey home, to ensure she makes her return safely. It is her sharp tongue and fiery defiance that makes him desire her as his little Lizzie.
Without reservation, he suggests to her father that Elizabeth be sent away to Alton Reform, a school known for its strict disciplinary measures to create fine young ladies capable of obeying their husbands. Ladies that without such correction would wind up in an asylum for their tenacious and troublesome ways.
Unwed and with no prospects of marriage, Elizabeth is forced by her father to attend Alton Reform and be trained by her governess under the headmaster’s guidance.
Elizabeth does not take well to Alton Reform’s ways of discipline. Unpleased after a stern spanking to her bare bottom, Elizabeth runs away, only to be caught by Mr. Thomas Montgomery.
Will he force her to return to Alton Reform? Can Thomas show Elizabeth that love can be gained from discipline? How will she feel when he confesses his desire to make her his little Lizzie?
*Little Lizzie’s Reform features elements of age play, anal play, discipline, and graphic sex.

Excerpt
With a heavy sigh, Elizabeth stepped forward into the house, wiping her shoes before taking several steps back, probably hoping to disappear into her bedroom and be forgotten about. Would she risk escaping again, just to avoid punishment?
“I know it is not my place, Sir, but perhaps I can offer a word of advice.” Thomas was not sure it was wise to interfere. It had been made clear to him that Elizabeth did not hold any sense of respect for the elder and it would do her well to gain a better understanding of right and wrong. Some children needed a little more encouragement, even as they grew beyond their childhood years.
“You are right it is not your place,” the older man said, “but as her father, I am up to my wits’ end trying to control the boisterous girl. Her friend, that Isabel girl has put the devil in her, and I have done all that I could to separate the two of them. Isabel has since been married off but it seems my Elizabeth has not yet grown out of such unfitting behavior.”
“There is a reformatory that I am well acquainted with, my own sister was sent there with a horrible bout of hysteria and has since been married and is with her first child. I can assure you that doctors were concerned if she did not attend such an establishment, she would still be suffering from hysteria and locked away in an asylum. I can only assume you do not wish for such a fate for your daughter.”
“My Elizabeth does not suffer from hysteria,” he scoffed at such an idea. “She is trouble but she is not unwell. Discipline is what she needs, not an asylum.”

Allison West has been inventing worlds and writing stories for years. Her favorite novels are those that leave a lasting impression, long after the final page is read. You can find more about Allison on Facebook and Twitter.