Daryl Devoré - Between Despair and Ecstasy 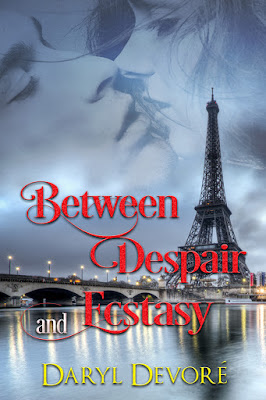 I'm very happy to have Daryl Devoré here at the Reading Room today. Between reading her blurb and her bio I think she would be great fun to get to know.

Blurb
Concerned for his fiancée’s safety, rock star Darien Scott races to Bangkok to protect Erika Bailey, only to discover his brother is missing. Fearing the worst, he contacts his nemesis, Gan, and makes a repulsive deal that will free his brother and protect Erika’s club, The Pink Flamingo. Or so he thinks. When a python and Gan are involved, things go sour, and Darien sinks into a deep depression.
Erika is disheartened by the betrayal of her parents. Her father's destruction of her club and the humiliation of her mother’s drunken behavior have her feeling down, but those are the least of her worries. She has a wedding to plan, but won’t. Having been betrayed too often, she’s scared to trust Darien.
How can Erika prove to herself and Darien that she loves and trusts him? Simple. All she has to do is jump out of a plane.

“Yeah, I was a bit tired.” Darien waggled his eyebrows. “But now I’ve had a power nap, and my batteries are all charged up.” He lowered his mouth and pressed a soft kiss against her lips.
A small groan rumbled in her throat.
He pulled back, stroking his hand across her cheek. “What I love about you is how hot you make me and how wired you can get. Your eyes. There’s still a burning hunger in there. Your nipples are still swollen, and if I touch you…” He skimmed a finger across her bush. Her hips jerked. “See. You’re still on fire.”
“Yes!” Ericka dropped her head back onto the pillow. “I’ve had two of the most mind-blowing orgasms, but my body is craving you. Your touch. You deep inside me.”
He kissed her throat and down to her chest. He reached for both breasts, tweaking and pulling her nipples.
“Oh. Every time you touch me. I just…more.”
“More what? What do you need?”
She pushed his shoulders down. “Touch me. Lick. Suck. I need you.”
He moved down her body and settled between her legs.
Erika closed her eyes and waited, her body charged, ready to respond. She held her breath waiting for that first touch. Would he lick her? Suck her? Nip her clit?
Her hands roamed over her body, down her sides, across her stomach, and up over her breasts. That didn’t fill the need to feel his touch on her. She squirmed against the bed, pulling her legs up and opening her knees wider, giving him access to her.
Still he didn’t touch her. Heat built inside. She pulled long deep breaths. She lifted her head and glared down at him. He met her gaze and grinned, but didn’t touch her. How dare he refuse? Her hunger needed to be fed. She raised her legs and hips and dropped them over his shoulders, positioning her pussy next to his mouth. “Please, Darien. Please. One touch and I’ll scream.”
Darien lapped his tongue along her clit in a single stroke. She grabbed the pillow and released a loud hiss. “Again.”
He repeated his move. She repeated her reaction.
She placed her feet on his shoulders and pushed away. “On your back.”
He grinned. “Yes, ma’am.” 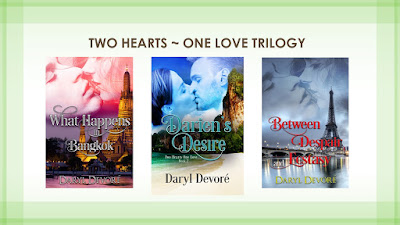 8 Questions for Daryl Devoré
What inspired you to write your first book?
My gr 10 Creative Writing teacher. We had to write a chapter 1 and he told me to keep going instead of doing the other writing projects. By the end of the semester I had finished it.
Do you have a specific writing style?
I don't think so. I just write the story the way it presents itself to me.
How did you come up with the title?
I usually ask for help. I have some very creative friends.
Can you share a little of your current work with us?
The one I am writing on doesn't have a name yet. But the next is a Christmas short and will be released in Dec and is called – Love in the Key of C.
Tell us something you hate doing. Why?
DISHES!!!!!!!!!!!!!  I'm an only child so they was never a time I could pawn the job off on a sibling.
Tell us something nobody knows about you.
If I do, then everyone will know about it.
Have you ever jumped out of a plane?
Why would anyone jump out of a perfectly good plane?
But funny enough, in this book the heroine has to.
Do you use a pseudonym? If so how did you choose it?
Yes, actually I have two? The one I made up, it just popped into my head and the other – I asked for help from writer's group.
Bio
Daryl Devoré (@daryldevore) lives in an old farmhouse in Ontario, Canada, with her husband, a black cat named Licorice and some house ghosts. Daryl loves to take long walks up her quiet country road or snowshoe across the back acres, and in the summer, kayak along the St. Lawrence River. She's touched a moon rock, a mammoth and a meteorite. She's been deep in the ocean in a submarine, flown high over Niagara Falls in a helicopter and used the ladies room in a royal palace. Life's an adventure and Daryl's having fun living it.