Ashe Barker - Conquered by the Viking


Conquered by the Viking 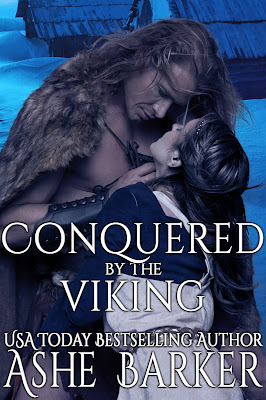 She has every reason to hate these Nordic invaders,
but will this one steal her heart?

Help me welcome back Ashe Barker to the Reading Room.  If you're looking for strong men, men with power and control, you need this book.

Eighteen-year-old orphan Merewyn has seen enough of Vikings to know she hates them, so she is furious when a band of shipwrecked Norsemen force their way into her home. Despite her best efforts to drive them away, their leader makes it clear they intend to stay for the winter. To her surprise, he also takes an interest in her well-being, and when Merewyn attempts to run off and fend for herself the battle-hardened warrior strips her bare for a painful, humiliating switching.

Despite his willingness to chastise her so shamefully, Merewyn cannot deny that these men are not the savage barbarians she expected, and she does not object when the huge, handsome brute who so recently punished her takes her in his arms and claims her hard and thoroughly. As the weeks pass, Merewyn's uninvited guest masters both her body and her heart ever more completely, but does he plan to truly make her his or will she be left behind when he sails home?

Publisher’s Note: Conquered by the Viking includes spankings and sexual scenes. If such material offends you, please don’t buy this book.

Can Merewyn overcome her natural fear of the mighty Viking warlord who has invaded her Celtic home? She's encountered his kind before and has first hand experience of the brutality of these ferocious Nordic raiders. Why should this blond invader be any different?

I require you to remain still, in that exact position, until I tell you that you may move. Is that quite clear?"
"Y-yes, yes, I understand."
"Then you may tell me when you are ready for me to start."
She closed her eyes and flattened her lips against her teeth. Mathios selected a switch from the bucket where several had been prepared and left to soak for his use. He examined the slender branch and was satisfied it would meet his requirements admirably. Olav had done well. He shook the droplets of water from the smooth branch and cast an appreciative glance over Merewyn's upturned, clenching buttocks as he did so. His little Celt really did have the most delightful arse, made for spanking.
"Merewyn? Are you ready?"
She managed a swift nod and tightened her death-like grip on the post.
The first stroke was relatively light, but still she let out a sharp hiss and went up on her toes. He had known she would. Mathios allowed her a few seconds to regather her senses before he laid the next stripe across her other cheek. Two pretty, crimson streaks now adorned her creamy flesh.
The next half dozen or so were delivered in rapid succession. Merewyn jerked and cried out with each one, but she held her position perfectly. He was proud of her resilience. Now it was time to become serious.
Mathios applied more weight as he continued to strike her perfect, peachy arse with the switch. The branch became frayed so he discarded it and selected a fresh one. Merewyn groaned, she was sobbing now, her cries more shrill as each spank fell. Red wheals criss-crossed her buttocks and he paused to lay his palm over them. The flesh was already starting to swell, he felt the heat rising from her punished skin. He curled his fingers to press harder and she cried out.
"Please, do not..."
"I will touch you as I see fit during your punishment. Your body is mine, to do with as I please."
There was no further protest from Merewyn. He caressed her bottom, his touch gentle. He continued until she stopped wriggling and remained motionless under his hand. It did not escape his notice either that her pretty cunny glistened with her juices. He had no doubt at all that he was hurting her, but her arousal was undeniable. Such were the vagaries of feminine sensuality, and Mathios for one had no complaints.
He resumed his stance to continue the switching. Merewyn stiffened but did not shift.
The next few spanks were hard and sharp. She screamed with each one and panted between the strokes. Her pussy swelled, her juices pooled and dampened her inner thighs, her bottom glowed a beautiful bright red. Mathios required yet another fresh switch in order to continue.
By the time he had ruined the fourth switch Merewyn's cries had become hoarse, her voice cracking under the strain. She no longer clenched her bottom in anticipation of each stroke. She had ceased to fight the agony of her punishment. Rather she relaxed, allowed the pain to flow through her body and surrendered fully to his discipline.
It was enough. Mathios dropped the switch and did not reach for a replacement.
"We are done here. You may stand up."

USA Today best-selling author Ashe Barker has been an avid reader of fiction for many years, erotic and other genres. She still loves reading, the hotter the better. But now she has a good excuse for her guilty pleasure – research.
Ashe tends to draw on her own experience to lend colour, detail and realism to her plots and characters. An incident here, a chance remark there, a bizarre event or quirky character, any of these can spark a story idea.
Ashe lives in the North of England, on the edge of the Brontë moors and enjoys the occasional flirtation with pole dancing and drinking Earl Grey tea. When not writing – which is not very often these days - her time is divided between her role as taxi driver for her teenage daughter, and caring for a menagerie of dogs, tortoises.  And a very grumpy cockatiel.
At the last count Ashe had around seventy titles on general release with publishers on both sides of the Atlantic, and several more in the pipeline. She writes M/f, M/M, and occasionally rings the changes with a little M/M/f. Ashe’s books invariably feature BDSM. She writes explicit stories, always hot, but offering far more than just sizzling sex. Ashe likes to read about complex characters, and to lose herself in compelling plots, so that’s what she writes too.
Ashe has a pile of story ideas still to work through, and keeps thinking of new ones at the most unlikely moments, so you can expect to see a lot more from her.
Ashe loves to hear from readers. Here are her social media links:
Newsletter sign-up
www.ashebarker.com
Facebook
Twitter
BookBub
Instagram
Pinterest
Goodreads
Or you can email her direct on ashe.barker1@gmail.com