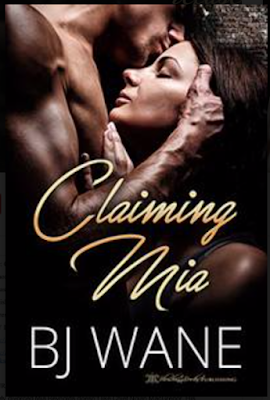 He asked for her trust, but that was the one thing she refused to give him

BLURB
Newly divorced Mia Reynolds doesn’t like Chief Nolan MacGregor. His arrogance gets under her skin, but it’s her body’s instant reaction every time he levels that cobalt gaze upon her or hints at giving her what he  keeps insisting she wants that really gets to her. After her husband’s betrayal, she’s sworn off getting involved with anyone, and certainly isn’t going to trust her fragile heart with the town’s reformed bad boy.

Nolan wants Mia and refuses to let her prickly stubbornness stand in his way. Once he entices her into an affair and shows her the benefits of submitting to him, her off-the-charts responses prove he was right all along – she is the one for him. When his investigation into an illegal drug ring implicates Mia’s business, he never stops believing in her innocence. When the Feds go around him, Mia refuses to believe he hadn’t been with her just to keep an eye on her and her nursery for proof the drugs were coming in on the trucks carrying her landscaping orders.

Mia’s reluctance to trust Nolan completely lands her in trouble with a drug trafficker and it isn’t until she is kidnapped that she realizes what her insecurities and refusal to let go of the past might have cost her…
Publisher’s Note: This steamy contemporary romance contains elements of power exchange.

EXCERPT 3
Nolan couldn’t recall the last time he’d enjoyed a new sub so much.  He didn’t know if it was Mia’s pleasing innocent naivete or the challenge of replacing her bad memories with mind-boggling new ones that pulled the most on his dominant side.  Reaching behind her, he unzipped the sundress and tugged the straps down her arms until it pooled at her sandaled feet. Her expressive green eyes flared with excitement, replacing the caution she didn’t try to hide as he rubbed his knuckles over her puckered nipples.

“Whatever I want, unless I hear you say red.  If you’re unsure about something but don’t want me to call a complete halt, say yellow.  Don’t worry,” he assured her with a slow glide of one finger up the damp seam of her pussy lips.  “I promise you’ll enjoy it.” She blushed when he held up his glistening finger. “You already are, and I’ve barely touched you.”  And that boded so well for the evening, he knew his good intentions to hold off on fucking her could be in jeopardy. “Slip off your shoes and come over here.”

Expecting her to obey, he padded over to the poles then faced her as she bent down to unstrap her shoes, her full breasts swaying, the turgid tips dangling downward for a few seconds in a tempting pose he enjoyed.  She straightened, and her already red face heated more as she walked over to him. He could read her unease with her nudity in her eyes but was confident he could get her to not only relax when naked but enjoy parading around bare before him.

“Just what are these for?” she asked, looking up and down the poles, her eyes shying away from the attached cuffs above and at the bottom.

“Tormenting wary subs.”  Nolan guided her between them and nudged her feet apart.  “I’m assuming you and the prick never played ‘tie me up’ games.”

A giggle escaped her and loosened her stance enough for him to stoop down and wrap the right cuff around her ankle.  “Not hardly,” she admitted, pleasing him with the truth.

“Someday you can tell me what you ever saw in him, and why you stayed so long.”

“My boys,” Mia returned without hesitation.

Nolan looked up to catch an expression on her face he’d seen numerous times on his own mother’s, one that told him how much she loved her children.  “They’re why you stayed, not what drew you to the asswipe in the first place. How does that feel?” Pushing to his feet after securing her left leg, he cupped her face and waited until the sudden flare of panic as she went to move her feet died down.  “That’s my girl,” he murmured in approval when her white-knuckled grip on the poles eased.

“Yes, and you will too once you let go of your preconceived ideas of what’s right and wrong, acceptable and not.” 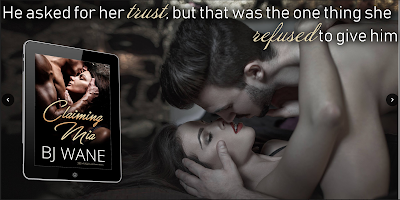 AUTHOR BIO:
I live in the Midwest with my husband and our dog, a lovable Great Pyrenees/Standard Poodle.  I love dogs, enjoy spending time with my daughter, babysitting dogs and kids, reading and working puzzles.  We have traveled extensively throughout the states, Canada and just once overseas, but I now prefer being a homebody.  I worked for a while writing articles for a local magazine but soon found my interest in writing for myself peaking. My first book was strictly spanking erotica, but I slowly evolved to writing erotic spanking romance with a touch of suspense.  My favorite genre to read is suspense.
CONTACT & SOCIAL MEDIA LINKS:
https://www.goodreads.com/author/show/3420232.B_J_Wane?from_search=true
bjwane@cox.net
http://bjwane.blogspot.com/
https://twitter.com/bj_wane
https://www.facebook.com/bj.wane
https://www.facebook.com/BJWaneAuthor
Posted by PK Corey at 12:00 PM