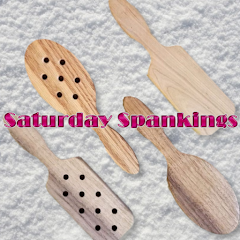 Welcome to Saturday Spankings! I have a hot snippet today from my latest, On the River. Jenny and Cal have been apart for nearly a week and her homecoming is a reason to celebrate. For Jenny and Cal this is best accomplished by an afternoon in bed.

They had discussed Jenny’s trip – back to the island where she and Cal had honeymooned. Suddenly Cal couldn’t stop thinking about one of the highlights of that honeymoon trip.

“I want to recreate the whole night. And your sore butt was a big part of it,” he said over the sound of the spanking. “Now hold position and I won’t have to bring out the paddle.”

They came at the same moment, something Jenny loved. Both sank down on the bed, basking in their pleasure. They were lying on their stomachs, as Cal’s hand reached back to gently rub the area he’d recently turned bright red.