It's a big week - Lazy Day is celebrating it's third birthday and Cassie's Space will be out Wednesday. I hope you have enjoyed the snippets I've shared on Saturday Spankings and today I wanted to share chapter one with you. 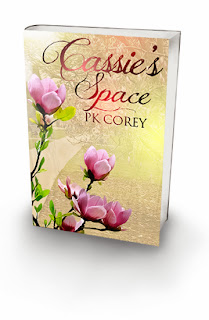 Chapter One
Have you ever wondered how others view you? I recently had the privilege of accidentally overhearing two ladies discuss me. While I realize most people frown upon eavesdropping, I couldn’t stop my ears from perking up and listening.
“She’s such a lady. Wouldn’t you love to be like that someday, refined, gracious, and elegant? I think she could wear a potato sack and still look like a queen. I love to hear her laugh: You can tell she just enjoys herself wherever she is. She’s fun to be around.”
“I think it’s Tom who keeps her so happy,” the other lady chimed in. “He’s pretty darned good looking for an older man. And they are so sweet together. He holds chairs for her, opens the car door even, they hold hands – I think they’re precious. I want to be her when I grow up – the perfect, southern lady.”
As soon as I moved out of earshot I laughed. Never before had I heard such a mixture of tiny bits of truth with the most ridiculous misconceptions in the world. I knew the truth. For much of my life, I do not think people would have used the word “lady” as the first word to describe me. In fact, “lady” may have been way down the list. I might never have made it to that lovely description had I not met Tom Duff. Perhaps these women described the ‘lady’ always buried within me, but Tom gave me the space, protection, and courage to allow her to come to the surface. I owe Tom everything.

****
Please forgive me: I haven’t properly introduced myself. My parents christened me Cassandra Jacquelyn Wentworth. A bit pretentious, don’t you think? But my parents were pretentious people. I’m Cassie to those who love me and “Cassie Jane” when I displease Tom. I often think back to our beginning as a couple – so much has happened since then.
I was twenty-nine when Tom came into my life. At that time I found myself often the fifth wheel when I partied with my best friends, Sue and Steve Moore, and Annie and Andy Holmes. Tom joined the firm where Steve and Andy worked. He had known both men for several years, but he had recently moved to our area.
Tom came to a party thrown by their new firm and, as he tells it, he walked in to see a wondrous sight. He saw me dancing, and for a moment, he tells me, all else faded into the background. I suppose I did look pretty good back then. I was young and I had a curvy figure back then when women were supposed to have curves – I had countless hours and money to devote to my wardrobe, make-up, and hair. I liked to look good when I went out. But Tom claims my looks alone didn’t attract him.. He liked the whole package. He liked the way I danced, the way I smiled and the way I laughed. He tells me he might not have experienced love at first sight, but certainly infatuation. Now I’ll admit the first time I saw him, I felt lust at first sight, but Tom has higher moral fiber.
Tom didn’t approach me at the party. He has always believed in studying a situation before plunging in. So he says he spent the whole party watching me from a distance. He stayed in the background and I never saw him. He noticed several things right away – I drank too much, I could be very forward, and I used unladylike language. After a time, he made his way over to Steve and Andy. Motioning toward me, he asked one question, “Who’s that?”
Both men turned to look at the subject of Tom’s interest and burst out laughing. “That, my friend,” said Steve, “is Cassie, and she’s one of a kind, a very interesting woman. She’s a beautiful, rich widow. Wild as a hare and someone you definitely don’t want to get tangled up with. Men who get involved with Cassie say it’s like cozying up to a wood chipper – she grinds you up and spits you out.” Steve laughed again and shook his head. “Come with me,” he told Tom. “I know a beautiful woman who will suit your taste much more.”
Tom frowned at him and looked back at me. Then he turned to Andy and waited.
Andy laughed, too, but in a much nicer way. “Steve’s not wrong. She’s hard as nails if you cross her: She’s got a temper for sure. But Cassie has a sweet, gentle, loving side, too. I think the temper may just be a cover because she’s scared. I don’t know of what, exactly. We dated for a while and I think the world of her, but I swear dating her is like herding cats. I think she’s obstinate to the point of being self- destructive. I tried to get her to stop drinking one night and instead, she began doing shots. She’s like a kid who won’t turn down a dare. Another time, she and I had a minor disagreement. The next thing I knew, she’d picked up some guy on a motorcycle and taken off with him, her dress hiked up around her ass. Couldn’t find her for two days, then she called Sue to pick her up at the hospital. She had a dislocated shoulder. She never told any of us how it happened, not even Sue. She’s too wild to deal with, Tom. I think she’s determined to kill herself before she’s through.”
Even today, I can just picture the look on Tom’s face at all the tales they told him. But I still wonder what went on in his mind. Why didn’t he run for the hills as fast as he could? Instead he wanted to know more. “You say she’s a widow? She’s young. What happened?”
Steve turned serious for a moment. “Now her husband was a real prick, used to beat the shit out of her. When he died of a heart attack every last one of us wanted to throw a party to celebrate. Left Cassie a ton of money, though. I guess she can party for the rest of her life – however long that may be.”
“How did she end up with him?” Tom wanted to know.
Andy took up the story. “Her loving father picked that sorry asshole for her. The guy was in his forties and Cassie was barely twenty. Her old man wanted a merger with the guy’s company and I think he threw Cassie in to sweeten the pot. That sick old bastard knew the guy beat her and never said a word to him. Once she escaped her family and the abusive husband, I guess she decided she’d take care of herself. I just don’t know if she can keep it up.”
“Quite a story,” Tom mused.
“She’s quite a woman,” Andy agreed. “But honestly, Tom, she’s got more baggage than even you could help carry. She’s not for you. You’ll get hurt. And I don’t want to see that happen.” Andy and Steve wandered off, leaving Tom watching me and thinking of all they had said.
Without even knowing it, I had made an impression on the man I would love for the rest of my life.
Posted by PK Corey at 6:00 PM