Kelly Dawson - The Ways of the West

There are so many great books coming out I think we should all stop our jobs and read full time. It's only the need to have a roof over my head and some food to cook that keeps me working. Otherwise reading and writing would fill my day.

Here is another great book out here for us. Kelly Dawson's newest! You're gonna love it! 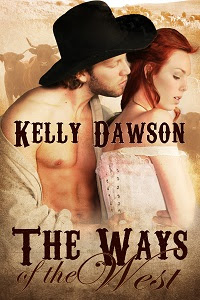 Blurb:
Orphaned by an attack on her family’s wagon train, Jessica finds herself stranded a thousand miles from Boston, the only home she has ever known. Only one man—a rough, dusty cowboy named Johnny—stands between her and the perils of the west, and he quickly makes it clear that he is ready to do whatever needs to be done to keep Jessica safe, whether she likes it or not.

When the unlikely pair stumble upon a cattle drive and they are both offered employment, Johnny doesn’t hesitate to accept. But after Jessica loudly expresses her disdain for his plan and for cowboys in general, Johnny decides it is time for drastic action. After a hard, embarrassing spanking followed by a tearful apology to the trail boss, Jessica is left with a sore backside and a strange yet undeniably powerful need to be held close and comforted by her handsome protector.

With Johnny by her side—and claiming an ever bigger place in her heart with each passing day—Jessica begins to adjust to life on the trail. But a cattle drive is a dangerous place for anyone, let alone a city girl with a penchant for disobedience. If he ever wants the chance to make Jessica his wife, Johnny knows he’s going to have to take her firmly in hand before she gets herself hurt or killed. Even if it means a painful, humiliating bare-bottom strapping she’ll never forget, one way or another he’ll teach her the ways of the west.

Jessica was enjoying watching the shocked, but delighted, expression on Johnny’s face as she stepped out of the borrowed dress to reveal short, sexy drawers that had been the height of fashion back home in Boston, but which were still considered scandalous among decent company. She left the gown and petticoats in a puddle on the floor at her feet and shimmied out of her undergarments, standing completely naked before him in the dim glow cast by the lantern on the table by the bed. She’d never been naked in front of a man before but the excitement of the wedding was making her brave.
Johnny whistled softly through his teeth, stepping forward to place his hands gently on her waist, drawing her into him. “You are beautiful,” he whispered into her hair.
Jessica’s hands went to the front of Johnny’s pants where she urgently fumbled with the buttons with clumsy fingers. She wanted him naked, too. Groaning in frustration at the tight buttons that wouldn’t come undone, she moved her fingers to his chest, undoing his shirt instead. These buttons opened easily and she trailed her fingers inside his shirt, along the hard muscles of his chest. Pushing the shirt back off his shoulders she brushed her lips against the light smattering of hair she found there, pulling his shirt off completely and discarding it carelessly on top of her own pile of clothing.
“Here, let me,” Johnny murmured, brushing her hands away from his jeans, undoing them for her. She gasped when his erection sprang free, then reached out to touch it gingerly.
“It’s so big,” she breathed. “Are you sure it will fit?”