Can Jack face his fears and find his love? Nadja must choose between what is safe and familiar and what is different and perhaps dangerous. Secrets in Jack’s past may drive her away, even as the paddle in his bedroom drives her passions. 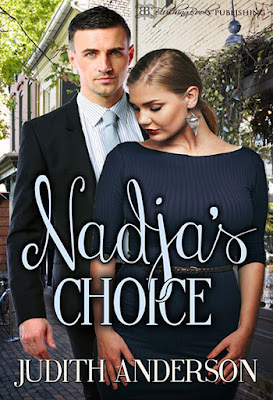 I'm happy to have Judith Anderson here in the Reading Room today. Her book Nadja's Choice is one you don't want to miss.

“Nadja’s Choice” is the story of Jack Avery, a computer technician and recent transplant from the big city to small town Flaxville, where he meets Nadja Koenig, the town librarian. Jack moved to get away from the city, but there other things he hopes also to have left behind…Nadja, a voluptuous woman with charming simple beauty, just wants her library—her sanctuary away from home—to remain the familiar place she grew up knowing and loving. But when she sees all the technological changes coming, will it be the same place for her? She feels threatened by Jack's plans to install a computerized check out system, but is intrigued by his air of command and self-assured confidence.The two can't deny their chemistry, even though they're both from different worlds and want different things, but as they begin to date, more and more obstacles seem to spring up.Larry Billings dated Nadja for a while in the past, and his interest in her has never waned. He wants to rekindle the flame, but now Jack, a suspicious city boy, is in his way. What lengths will Larry go to, to claim what he thinks is his?As for Jack and Nadja; will his dark secrets from the past drive her away? And how will she react when he offers to introduce her to the BDSM toy box under his bed?

Excerpt:
Nadja saw that a soft pallet had been created on the stall floor and she looked up again at Jack. He pulled her wrist so she was facing him and then he wrapped his arms around her, pressing her close to him again.
She clutched his shirt as they kissed, and all she wanted was to be on the pallet, under him, with his mouth and hands all over her body. He seemed to read her mind as he broke their kiss and guided her to lie down on the soft fabric. He kissed her neck and shoulder again, his lips nibbling their way down in between her breasts, as far as her dress would allow. She crossed her
hands above her head, her breathing turning into quick panting as his nibbles turned into bites at her breasts.
Jack opened his eyes, saw where her hands were, and paused. "Why are your hands there?" he asked.
"Because that's where they want to be…"
"Perhaps I should… hold them there. To make sure they don't move."
Nadja took a deep breath and nodded hesitantly, looking him in the eyes.
He didn't have to be told twice, taking her wrists and holding them down to the pallet. His legs worked their way between hers, hiking her dress up. She bent her knees, helping the fabric rise to her waist. She arched her neck as she felt him grind against her, feeling his hard need between her legs, wanting so badly for him to be even closer.
Still gripping both of her wrists with one hand, he slid the other down her body, clutching her breast, then caressing down, past her waist and then under her dress. Moans escaped her lips as she felt his fingers slide down her leg and then back up her inner thigh, closer and closer to the heat between her legs. His fingertips pressed against the cotton of her panties and she thought she could see a hint of a smile when he felt how wet she was for him. She squirmed against his body and strained against his hold on her wrists as he rubbed harder against the increasingly wet fabric. Strangled words slipped from her lips. "Please, oh god, please."
His teeth bit their way to her ear, so he could whisper, "Please what? What do you want, baby?"
Her lips trembled. "Please take me."