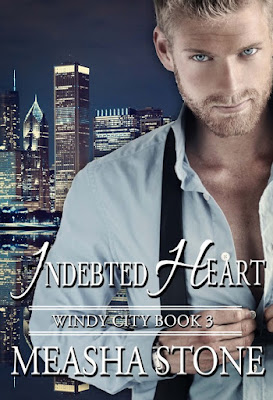 She works so hard to earn a place in the world,
but all he wants is for her to find a place in his heart.

I'm very happy to have Measha Stone as my guest today. Her book Indebted Heart is one you won't want to miss.

Blurb
Alyssa Sanders has taken care of herself since she was too young to do so. But she’s all grown up and ready to get her life on the right track.  She heads to Chicago with her life savings and a few prospects. She expects to get a job, find an apartment and get on her way of settling down. What she doesn’t expect is to find her new boss not only severely attractive and Dominant, but the son of an old friend.
Alex Trebelli would do anything for his father, so when he’s asked to escort an old friend’s daughter to dinner he doesn’t hesitate to agree. Except the daughter isn’t the small town young woman his father described. She’s all grown up, full of beauty and curves, and a submissive nature that draws out his dominant side.
When Alex explains he won’t be her friend, he can’t just be her friend, he wants more, he wants to be her dominant, her boyfriend, she has to decide if she’s going to take the leap. She’s never been good at a full time D/s relationship, but Alex makes her feel safe and secure. She finds him easy to be with, even when he’s being overprotective and bossy.
Can she manage to put aside her fears of failure, and self-doubt and give them a real chance, or will she chose the safer route and keep clear of his sexy smile, and dominant ways?

Excerpt
The silence made her nervous; she wanted his words, his touches, and the lack of both worried her. Just as she was about to break her silence he stood in front her. His hands dug into her hair and he pulled her head back to look up at him. The pleasure and joy she expected to see alluded her. Instead firm, frank eyes glared down at her.
"Where did you get the cuffs?" he asked.
"The foot locker in the closet," she said, searching his expression. Anger did not lurk behind his words, but displeasure shone through his eyes.
"What were your instructions?" he asked, releasing her hair and moving down to his haunches, keeping their eyes locked.
"To come in here, strip, and kneel with my hands behind my back and my eyes downcast," she answered and before she could continue, he spoke.
"And in those instructions where did I say to go into the closet and dig out a pair of cuffs?"
"Nowhere, but I—"
"You are trying to control the situation." His words were given in a soft tone, but the implication was harsh.
"What? No. I was trying to add to it, to give you more of what you wanted." She wished they could have the discussion clothed.
"What I want, what I desire, is your submission, your obedience. If I want your hands cuffed, I'll give you the instructions or I'll do it myself. You wanted your hands bound. You wanted to feel the cuffs on your wrists, bound, and waiting for me. Those were your desires."
"Don't my desires matter?" she asked with an edge that she quickly regretted at the instant raise of his eyebrow.
"Of course they matter. And I will always take your desires into account. When you submit to me, you trust me to give you want you want, what you need, and push your limits, but you don't control what happens."

ALSO IN THE WINDY CITY SERIES
HIDDEN HEART, BOOK 1
A woman given up on love, second guesses her solitary life when meeting a man who won’t take no for an answer and opens her eyes to an entire world of pleasure she didn’t know existed before him.

SECURED HEART, BOOK 2
A headstrong, fiery woman seeks to fulfill her fantasies in all the wrong places, and it’s up to the security expert to tame her, and keep her safe.

A little more about our author:

The obvious question. How did you become a writer? I’ve been doing it since I was a little kid. I didn’t really think anything of it until my mom pointed it out to me much later.  In Junior High we had to write a short story for the open house, and all the other kid’s stories were one page, a few paragraphs, mine was the only one that took two pages and had dialogue and everything. She knew then I was going to be a writer. When she told me that story, I figured, hey, she’s right!  Silly, that I needed someone else to say it in order for me to know it, but writing stories was just something I did for fun, to entertain myself.


Name one entity that you feel supported you outside of family members.  Blushing Authors have been a huge help, especially with this release. Everyone is so helpful and genuine. It’s been a great experience and hopefully the first of many.

What do you like to do when you’re not writing? I still have a day job, but in the off hours, if I’m not writing, or thinking about writing, I’m usually curled up with a book. If my kids happen to actually be home instead of off playing with friends, we’ll spend time together watching old sitcoms on Netflix, or having a family game night.