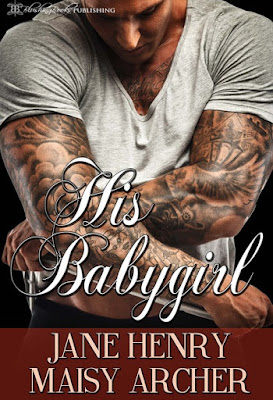 His Babygirl Blurb
Alice Cavanaugh learned early that the only person she could count on was herself. As a single mom, she works hard to provide the best life possible for her son Charlie, and to earn the respect of those around her. She might take part in a scene at The Club, but she's way too busy to be anyone's full-time submissive. And that's fine with her, since the one dominant she's fantasized about submitting to has given her nothing but mixed-signals and heartache… until now. Alexander "Slay" Slater, a former Marine and Dungeon Master at The Club, has been eyeing Alice for a while now… from a distance. But now that he's set his sights on her, he's all in. He will make her feel safe and cared for, and attend to her every need—including taking her over his knee for a sound spanking when she needs it. But when Alice and Slay are roped into a dangerous entanglement with an insidious drug cartel, their relationship is put to the test. Can Alice trust Slay, even when it means ignoring her own fears and instincts? Can Slay keep Alice safe from the dangers that they face? Above all, can they overcome the obstacles that keep them apart—so that Slay can become Alice's Daddy, and Alice… his babygirl?DISCLAIMER: This book contains the spanking of adult women, mild elements of age-play, and BDSM including power exchange. If any of these offend you, please do not purchase.

Slay moved in behind her and the door shut behind him with a soft click. Without saying a word, he reached for the thermostat on the wall and bumped the temperature up several degrees.
He’d seen her shiver and he was keeping her safe and comfortable. But without touching her, naturally. Keeping his distance.
And that wasn’t what she wanted at all.
Alice sighed, tired and defeated. “Slay, I can’t do this.”
“Face the wall and spread your legs.”
Alice turned to find him leaning back against the door, his arms folded over his chest, his face impassive and his eyes… burning.
She shook her head quickly. “No. This isn’t what I want.”
Before she had time to think, he was behind her, turning her. One strong forearm wrapped around her stomach, holding her against him, while the other braced them against the wall. He tilted her head to the side with his chin and whispered in her ear.
“Bullshit. You wanted this. You wanted exactly this. That’s why you’ve defied me for the past few months, working the main bar, wearing this skimpy leather skirt. And that’s why you went outside tonight. You knew every inch of this building is covered by security cameras. You knew I’d see you, that I’d come for you. And I did.”
Oh. Oh, God. Where was the instant denial that should be coming to her lips? Where was the outrage?
She couldn’t summon any. Her heart raced as she recognized the truth… maybe he was right. Maybe she had known.
“Spread your legs for me, Alice,” he commanded softly. “Let me do this.” And as though her muscles obeyed his command without consulting her brain, her feet moved apart and she arched forward.
“Yes,” she breathed.
“That’s my girl,” he approved, and Alice felt a brief flare of pleasure at his words… and then her thoughts completely stuttered to a halt.
Oh my God. Pressed against her ass was a rock-hard erection that, like everything about Slay, was of mammoth proportion. And she knew in that instant that he wasn’t simply a little turned on by their positions, and he wasn’t just understandably excited by the impending spanking, like any dom might be. No, he was violently, rampantly aroused in a way that said he’d been suffering this way for more than a minute or two. He was hard as a fucking stone, for her. He was as invested in this as she was.
And that changed everything.
From one second to the next, she surrendered completely. And she knew he felt it when he stepped back, no longer fighting her or even commanding her, but arranging her pliant limbs into the proper position, bending her at just the right angle.
She closed her eyes and listened to his harsh breathing, concentrated on the tingles of sensation she felt when his fingers brushed against her skin. She was so turned on that her pussy throbbed with it. She needed his hands on her right that second.
He knelt behind her, his hands guiding her high-heeled feet just a few inches further apart, and then he stopped. His hands dragged up the insides of her bare legs, from her ankles up her smooth calves to her knees, and then further, along the backs of her thighs to the hem of her short black leather skirt, now pulled taut against her spread legs. He stood up, hooked his fingers under the hem and lifted it, centimeter by centimeter, exposing the swell of her ass, shielded only by the tiniest scrap of black lace, to his eyes.
It was exquisite torture waiting for that first slap to land, imagining his eyes on her flesh, wondering what he thought and whether he could possibly be as turned on as she was.
And then his broad, hot palm hit her cool flesh, and she could think of nothing but that.
Holy shit, but it hurt.
Maybe it was because her emotions were running high, or maybe because she hadn’t had a good session in weeks, but the pain was startling in its intensity. In the two years she’d been into the club scene, out of the dozen or more guys that had spanked her ass in that time, she’d never felt the pain come on so swiftly and powerfully.
“You messed up tonight, little girl,” he told her as she gritted her teeth through a half-dozen swats.
Alice frowned. What had he said? The pain made it hard to focus.
“Uh. Yes. Yes, sir. Sorry.” She recited her expected line dutifully.
But from behind her, she heard Slay mutter “Jesus,” clearly not appeased. He leaned over and whispered hotly into her ear, “When I'm punishing you, you call me Daddy.”
Buy His Babygirl:
Amazon: http://tinyurl.com/j5gsgzy
Kobo: http://tinyurl.com/h6kua7d
Blushing Books: http://tinyurl.com/jy3wy5a
Barnes and Noble: http://tinyurl.com/zw2c8wv

Other Books in the Bestselling Boston Doms Series:

Connect with the authors
Jane Henry
Jane has been writing since her early teens, dabbling in short stories and poetry. When she married and began having children, her pen was laid to rest for several years, until the National Novel Writing Challenge (NaNoWriMo) in 2010 awakened in her the desire to write again. That year, she wrote her first novel, and has been writing ever since. In 2012, she became interested in the d/s lifestyle, and has discovered her love for writing romance with a d/s twist. With a houseful of children, she finds time to write in the early hours of the morning, squirreled away with a laptop, blanket, and cup of hot coffee. Years ago, she heard the wise advice, “Write the book you want to read,” and has taken it to heart. She sincerely hopes you also enjoy the books she likes to read.
Maisy Archer
Maisy is an unabashed book nerd who has been in love with romance since reading her first Julie Garwood novel at the tender age of 12. After a decade as a technical writer, she finally made the leap into writing fiction several years ago and has never looked back. Like her other great loves - coffee, caramel, beach vacations, yoga pants, and her amazing family - her love of words has only continued to grow... in a manner inversely proportional to her love of exercise, house cleaning, and large social gatherings. She loves to hear from fellow romance lovers, and is always on the hunt for her next great read.
Follow us!
Maisy Archer:
Facebook
Twitter
Maisy's Amazon Author Page