Libby Campbell - Sadie Says I Do

Sadie wants to fix the world. Simon wants to rule it.
Starting with her. 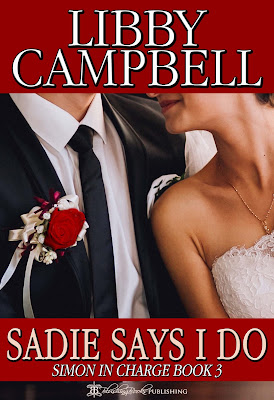 I'm so happy to have Libby Campbell with me today. I understand her feelings about her characters and I appreciate her willingness to to a series. I do love a good series.


Sadie and Simon are ready to exchange vows. Almost. All they need now is a place to call home. Once that detail is settled, Sadie promises she’ll start planning the wedding.
Money is no object and a realtor finds them a house they love immediately. Could it possibly be that easy?
Of course not! An outstanding claim means the title won’t be free for a few months yet. In the meantime, Sadie wants to carve out a life with a daily routine focused on volunteer work with homeless people. Haunted by a ghost from his past, Simon wants to resume his life of international travel at least until the house is theirs.
Can they find a happy medium?


This is book 3 in the Simon in Charge series. It can be enjoyed as a standalone novel and includes that all-important HEA.

When at last she peeked out from the ensuite, he put down the computer and arranged his legs, ready for her.
“Come,” he said. “But leave the nightie on. I like the way it doesn’t cover you much at all.”
Sadie blushed and crawled over his knees. He lifted the short hem of the nightie, pleased to find she wasn’t wearing as much as a G-string underneath it. When she was compliant without being told, his lust for her spiked.
“Good girl,” he said, with a sigh of appreciation, rubbing her soft white skin. “Now tell me why you find yourself here tonight.”
“Because I’m a slow learner?”
“Correct. And because you showed poor judgement in not telling me about that cop hitting on you. I want to know about anyone who makes a move like that, do you understand?”
“Yes.”
“I mean any time, any place. Ever. Do you understand?”
“Yes.”
“Yes who?”
“Yes sir.”
“Good. Now we can start.”
He spanked slowly and softly, saying nothing. The only sound in the room was the rhythmic falling of slaps on her round cheeks, a delicious tattoo that Simon enjoyed very much. This spanking wasn’t about pain or physical discipline. It was about Sadie submitting to him, accepting his role as leader.
She moaned a little, which was reasonable given how frequently she had been in this position over the past week. After ten soft smacks to each buttock, he stopped and helped her to his lap, his hands powerful and tender at the same time. With great gentleness, he pressed her head to his shoulder.
“Why do I do that?” he asked.
“Because you love me,” she repeated, a practiced but heartfelt response.
“And you love me?”
“I do.”
“And you want to make me happy?”
“Most of the time,” she grinned.

Don’t miss these other great books from Libby Campbell and Blushing Books:

Libby lives on the West Coast of Canada with her husband of over twenty-five years. An avid reader, she savors books that feature strong, independent women and the loving men who challenge them.

She loves mountain hikes, deep bubble baths, and all animals, but particularly small dogs with big attitudes and big dogs who think they are lap dogs. A woman for all seasons, Libby is happy cuddling in front of a winter fire, watching a summer sunset, listening to birds in the spring and walking in the autumn rain.

Optimistic by nature, Libby wants a solid HEA in her reading and her writing. She hopes you will enjoy escaping to the dream worlds where she spends far too much time.

Recently she’s been dipping into Pinterest and building boards with images of people and places that inspire her characters and the worlds they live in.

Your first book, Simon Says, came out in January 2016. Sadie Says I Do is a December release. What did you learn in that first year of writing romance?

When I finished Simon Says, I got a big surprise: I’d fallen in love with Simon and Sadie and wasn’t ready to say good-bye to them. Their story just kept unfolding in front of me and I had to explore their world further. Three books later…
Next I realized I love writing this genre. It’s playful but still demands a lot from an author: the characters must be complex and the stories have to have a well-paced. There has to be a satisfying ending that brings all the threads and characters together. For me that means there has to be an HEA.
I also learned that other writers in this genre are enormously helpful and supportive.

What was your best date ever?

My first date with my husband. In the middle of a crowded restaurant, he said I needed a spanking. I was gazing out the window but that got my attention. Even though he’d never spanked a woman before, something in me triggered that response. How could that be? I’m such a compliant, easy going sort of person.
At that moment, I knew we were meant for each other. The opening scene of Simon Says is based on that date.

When you write do you ever model your characters after real people?

Simon’s ease with languages is based on two people I know, both of whom only need 4-5 hours of exposure to a language to develop working fluency. What a gift!
All the other characters are straight from my overactive imagination, often inspired by real events. My female protagonists may include a great deal of my own personality.
What do you know now that you wish you’d known when you started writing?

When pitching a book, it’s helpful if you have your next one or two books mapped out so the publishers knows their investment of time in you will continue to be productive. I didn’t do this, by the way.

The real work starts when you get a contract. Once you have the release date, a new phase begins: that of getting it into the hands of readers.

Much of a writer’s time is spent in peripheral activities. It begins with writing and rewriting, which includes research and fact checking. Add to this the social media demands. A writer needs some of the following, and possibly more: a blog, a presence on Facebook, Twitter, Instagram, Pinterest etc. Maintaining these profiles can consume a huge chunk of the day. Many writers publish regular newsletters. I haven’t waded into those waters yet.

Also there’s the very real need to keep upgrading writing skills, going to conferences, and networking. Then there’s the obvious: a writer needs to read. A lot.
Posted by PK Corey at 12:00 AM