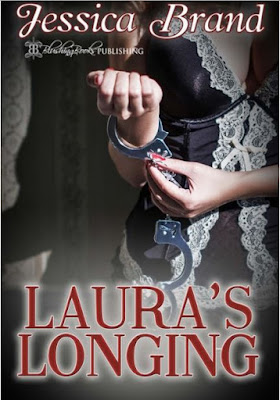 Where is the line between pain and pleasure?

I'm happy to have Jessica Brand visiting at the Reading Room today.  Laura's Longing is one you are not going to want to miss!

Sales blurb:
A story of love and exploration. Laura is the quintessential all American small town girl, the vivacious cheerleader who is saving herself for the love of her life. Unfortunately the love of her life is the bad boy in town. Young love being what it is, she finally decides he’s the one to make her a woman and she develops a plan for her fairytale outcome. Unfortunately her fairytale turns into a horror story when she finds her beau, in flagrante delicto with another girl bent over the kitchen table.

In her anger and her grief she seeks solace from her closest girlfriend and after purging some of her pent up lust in the arms of her friend she decides the town is not big enough for all of them and moves to the city to make a new life. Accepting an offer of accommodation in Denver from a mysterious woman a few years older than herself, Laura soon discovers activities taking place in her host’s basement studio that defy Laura’s comprehension. Initially shocked at what she witnesses, her shock turns to arousal as she watches erotic games involving activities she had no idea were possible.

As he caressed her butt, she tested her range of movement and found it was very limited. Her feet were not secured and were free to move, but with his strong hand holding her arms imprisoned against her back, she had little other movement available to her. Just as she was getting her thoughts together coherently, the spanking started again.
This time it was a little harder than before and he struck her in a different spot each time, gradually working his hands all over her ample butt cheeks. He watched as the skin beyond her panty line was turning a delightful shade of pink and when he paused again he could feel the warmth emanating from her skin. Drawing her panties up into the crease of her buttocks, he then continued with his hand.
By this time Laura was beginning to squirm against his thighs as the intensity got to her. Each swat reverberated through her whole pelvic region. In a reflex action, her feet were beginning to move with each swat. As much as she tried to prevent it, she found she couldn't and she didn't realize that in the process of responding to his spanks, she had slowly opened her legs. This time when he paused to caress her, his fingers drifted between her legs. With her panties pulled tightly over her sex, she felt his fingers brush ever so lightly along her labia. She knew she was literally dripping wet in her arousal but she didn't care.

How did you become a writer? I have harbored an urge to be a writer for many years, figuring I could write as well as many published authors but never having the wherewithal to actually see a story through to completion. When I finally did, I found that people actually liked it and I have continued ever since.

How many books have you written? Are they all spanking fiction? I now have six published books under two pseudonyms – Jessica Brand and R. R. Greaves. They all have elements of spanking in them but they tend to be more into BDSM, power and control and are quite explicit.
Are you okay in your kink? I embrace my kink. After keeping it repressed for many years, I realized that you only live once. Just about everyone has fantasies and many of them are about things we would not normally share with family and friends. What goes on between two consenting adults is nobody else’s business and hence the biggest decision should revolve around whether one wants to act out their fantasy or whether they want to keep it in their mind. Once that decision has been made, it’s easy.

Where do you find inspiration for your stories? When you write, do you ever model any characters after actual people? My inspiration comes from my own fantasies and experiences then I weave them into a story that, hopefully people can relate to. I want people to read my stories and be able to imagine themselves in the thick of the action – either as the dominant character or as the submissive. Some but not all of my characters are modelled on real people I’ve met and played with.