Welcome to Saturday Spankings and to summer. It’s time to sit by the pool and read. Ignore your job and other responsibilities and just enjoy a good book! You could try it, might at least get you spanked. My snippet today comes from Educating Jenny, the third book in the Cal’s Law Series.


Jenny still has a lot to learn about what to say once a spanking has begun.


Positioning her over his lap, he repeated his rule, “I don’t mind you going to the occasional party, you just have to leave if drugs come out. And I mean from pot to coke, anything.”


“I never go to any parties with anything worse than pot, and you know that,” Jenny told him emphatically.


“Good,” Cal responded as he positioned her across his lap. Jenny was grateful he was only using his hand and that he began with moderate swats. Her gratitude waned as his hand fell harder and faster.


The next two swats were harder still and landed on her thighs. “Son of a bitch! Stop,” Jenny shouted.


Cal paused to make sure Jenny could hear him. “You keep up the cussing and this could last a while. You made the decision to break the rules, you take the consequences. And I’m telling you, cussing during a spanking is never going to be a good idea.” 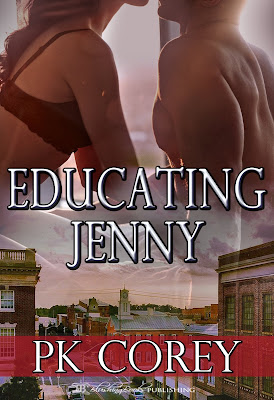 Cal’s young wife, Jenny, just wants to play house with her gorgeous, dominant husband, Sheriff Cal Bennett of Beaufort County.   Cal wants her to complete one more year of college before choosing a path.  Although Jenny is tired of school, she bends to her husband’s wishes and goes off to classes in a nearby city.  On their precious days together, Cal educates his beautiful girl to the idea of sexual fantasies and bedroom toys, and here, Jenny is an eager student!

She is applying herself to her classes and showing Cal she can be responsible when, suddenly, Jenny finds herself being stalked by a mysterious police officer who views every move she makes as criminal. Everyone she cares about knows that what ensues is not Jenny’s doing, but she can’t keep herself from giving in to some sweet revenge. Her plan starts out as a silly college girl prank, but soon lands her on the wrong side of Cal’s law.