BJ Wane - Submitting to the Rancher

Submitting to the Rancher
BJ Wane 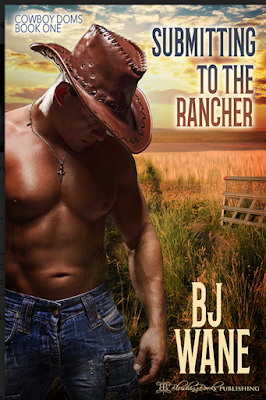 He ignored her then reprimanded her and finally succumbed to her charms.  But did he come around too late to save her from a threat to both his ranch and her safety?


I'm happy to have BJ Wane back at the Reading Room. She's hitting close to my heart here. I think you'll like this one.

BLURB:
Sydney Greenbriar finds more than she bargained for when she gets lost on her way to report for a new job and finds herself at a BDSM club. Peering in through the window, her attention, and libido are both snagged by one man delivering some old-fashioned discipline to a young blonde. After he runs her off, both are surprised to discover she is the new cook he’d hired for his ranch.
Caden MacGregor wanted to turn away the cheeky woman he’d caught spying on his club without remorse, but desperation for a cook forced his hand. Sydney proved to be a definite asset to his employees, and a royal pain in his butt. Somehow, her penchant for getting lost and landing in trouble, along with her determination to return to the club as a guest, soon slid past his resistance.
It took a threat to Sydney and unearthing the truth about what made her flee her home in Missouri to force them to admit their feelings and get her to stay as more than his cook.
Publisher’s Note: This contemporary western romance is intended for adults only and contains themes of mystery, suspense, power exchange, ménage and adult themes. If any of these offend you, please do not purchase.

EXCERPT:
Guilt had coiled through him like an insidious snake and kept Caden from enjoying himself once he arrived at The Barn. Instead of seeking a willing sub to spend the evening with, he’d sat at the bar brooding over a pair of hurt, green eyes and a lonely figure standing on his front porch as he’d driven away. Connor hadn’t helped, accusing him of being too hard on Sydney, not giving enough consideration to her new arrival in the state. Finally giving up on getting any enjoyment out of the night, he left it to his brother and best friend, Grayson Monroe to close up and returned home to check on their new cook.
He hadn’t expected to find her up, standing in the dim light of the kitchen wearing nothing but a skimpy nightshirt hiked up to reveal the edge of pink panties as she reached for a glass with a shaking hand. “What’s wrong?” he barked, striding forward and turning her to face him. Her slender body shook under his hands on her shoulders and her face was paler than usual, but those arresting eyes snapped with green fire when she jerked away from him.
“Nothing, I got up to get a drink and didn’t hear you come in.”
“The house is well-insulated against the harsh winters. What’s wrong?” he asked again, some insane part of him needing to know despite the way she crossed her arms in a belligerent stance of stubbornness.
“I couldn’t sleep.”
The evasive shift of her eyes gave away that untruth, drawing his scowl. “Do your hands always shake when you can’t sleep?”
She avoided his question again with a point-blank one of her own. “Did you have fun with your blonde?”
Exasperated, Caden swore and demanded, “Are you going to tell me what happened to upset you?”
Sydney tilted her head and regarded him with a probing stare before asking, “Are you going to let me into your club?”
She’s like a damn dog with a bone. “No.”
“Then goodnight, boss.”
Sydney moved to brush by him and, unable to let her go just yet, Caden gripped her arm and hauled her against him. Frustration with the entire, fucked-up night ripped through him. Fisting his free hand in her red hair, he tilted her head sideways and dipped down to nip at the soft, tender flesh of her neck. Her gasp went straight to his cock; her low moan as he stroked his tongue over the bite jerked him into a semi-erection. Lifting his head enough to coast over her lips with his, he warned in a low voice, “Be careful what you wish for, Sydney. You may just get more than you bargained for.” Before he could give into the temptation to toss her down and bury himself inside her slick heat right there on the kitchen floor, he released her and stepped back.
“Goodnight.” Caden left her standing there with a bemused expression, but that was better than the stress lining her face from whatever had kept her awake. He needed to learn to remain calm and unaffected by her, to remind himself she was just another employee, here to do a job, and that was the extent of their involvement. 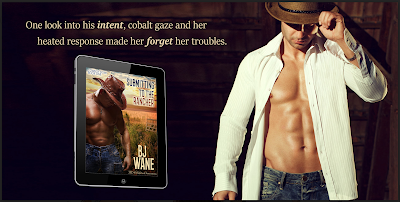 BIO AND SOCIAL MEDIA CONTACTS
I live in the Midwest with my husband and our dog, a lovable Great Pyrenees/Standard Poodle.  I love dogs, enjoy spending time with my daughter, babysitting dogs and kids, reading and working puzzles.  We have traveled extensively throughout the states, Canada and just once overseas, but I now prefer being a homebody.  I worked for a while writing articles for a local magazine but soon found my interest in writing for myself peaking. My first book was strictly spanking erotica, but I slowly evolved to writing erotic spanking romance with a touch of suspense.  My favorite genre to read is suspense.