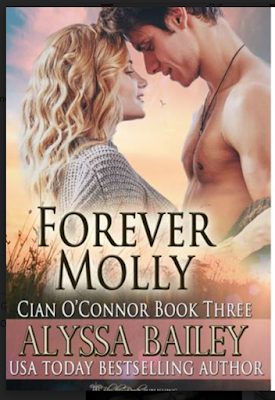 The spice of life is a sassy wife.

I'm happy to have Alyssa Bailey here again today. Her excellent writing always has you coming back for more.

Forever is a long time to live with the wrong decision.

Newlywed Molly O’Connor loves a mystery of any kind and solving them gets her blood pumping almost as much as her new husband Cián O’Connor. Cián wants his wife to ease into her new life and is open to any way she finds comfortable. Soon, however, it becomes obvious that running a clinic, orienting to a large Irish family, and dealing with her protective husband isn’t enough excitement for the love of his life.
When things progress from a little harmless fun to horse thefts, assaults, kidnapping, and even murder, Cián puts his foot down. Despite his admonitions, his bride is too emmeshed in the events going on around them to heed his warnings for long. Molly becomes secretive, refusing to let go until it’s too late, putting herself and her family in grave danger.
It will take help from the entire O’Connor clan along with some special friends to ensure the young couple’s forever isn’t over before it begins.

There was consent and implied consent. When it was discipline, it was implied, and he needed nothing more to carry out his duty to her, but when it was for mood and her imbalance, it was important to him to have new consent. In this case it was both, her mood today and its associated meanness as well as discipline from her unaddressed behavior and disobedience the night of the assault. His brothers didn’t always see it that way, but it was his wife, his marriage, his life. This is how he wanted to live it.
“I don’t want your charity.”
Cián sighed. Maybe his brothers were on to something after all. They had been married longer. He probably should just spank the mood out of her.
“Aingeal, I have no idea why you are so petulant or what it is you think you want but I can tell you what I want, and right now.” She stared at him with her teeth biting her lower lip. “And it has become obvious that it’s what you want too but you don’t know how to ask. I don’t know what’s gotten into you, but I have a proven method on how to get it out.”
Molly’s pupils dilated in widened eyes as she looked at Cián in dawning realization of his intent. “Um, I’m fine. Really. Let me clear the dishes and I’ll get my coat.” When he didn’t stop her from her task, he watched her grow tense. Instead of trying to smooth things over, her shoulders stiffened, her movements were angry. She roughly tossed things around making plenty of noise.
“Give me your hand, aingeal.” She ignored him, busying herself with wiping the counters.
Cián stood back to see if she could settle herself. But she simply rattled dishes and when he touched her arm, she shoved away from him a third time, turning to gather the fry pan. That was enough. Time to help her get rid of the angst. He grabbed the spatula still on the table and walked toward his girl. 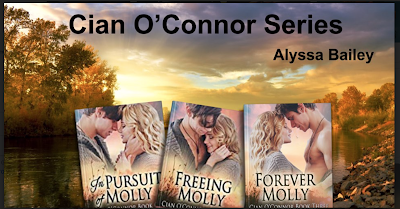 USA Today and #1 International best-selling author, Alyssa Bailey, lives amongst the beauty of Southeast Alaska. She lives where the sky meets the rainforest on the mountains; the mountains touch the ocean, and the wildlife frolic on land, sea, and air. Humans, the ultimate interlopers, are wedged in where allowed and are properly thankful for the privilege.

Alyssa loves writing realistic romance for the naughty in all of us. Writing power exchanges between strong, intelligent, sassy women who are not afraid to make a stand and men confident enough to give his woman space, but Alpha enough to keep her safe despite her choices is a common theme.

She loves series and finds she is expanding her horizons and comfort zone with every new book. Sometimes, suspense and mystery stirs the plot. HEA’s are her passion.

Note about penning this book:

This last trilogy and especially the last book was difficult for me. I have grown as an author during the writing of the O’Connors. If you start from the beginning, with Liam and Jocelyn, you will not only follow the progression of the family storyline but the story of my writing.

There were plenty of ups and downs and growing pains but at the end of the day, like the O’Connors, I like where I am. And like them, the next generation is in full swing and their third generation is beginning to find love as I am beginning to spread my own wings to spaces and places I never thought to go.

I hope you have fallen in love with the O’Connors. Would you like to know of other new and wonderful places my writing might take us?

Check out the venue of your choice below and follow me.

You can find Alyssa online: