Libby Campbell - Bound to the Admiral

Bound to the Admiral
The Lighthouses of Devmaer, book 1
by
Libby Campbell 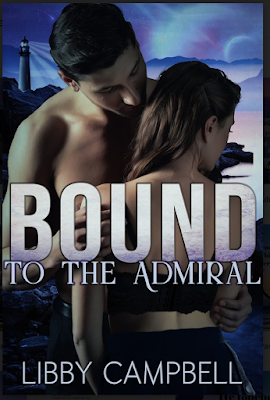 She’s a princess and he’s an admiral. Can he tame her mutinous behavior?

I'm so happy to have Libby Campbell visiting here again today with her latest. I'm sure you're going to enjoy it.

Blurb:
When her parents choose a gruff, battle-hardened admiral as her mate and give her no say at all in the matter, twenty-one-year-old Princess Gael does not hesitate to make her displeasure known. Despite her protests, however, her old-fashioned yet undeniably sexy husband-to-be wastes no time in taking her over his knee and baring her bottom for a painful, embarrassing spanking when she defies him during an ancient ceremony intended to celebrate their union.
Fleet Admiral Kai Grenville has no doubt that taming his beautiful, feisty new mate will be a battle, but it is a battle he intends to win. If that means paddling Gael’s beautiful backside bright red with her panties stuffed in her mouth to teach her what happens to sassy mates, then so be it.
Though she does her best to remain indignant about her situation and Kai’s willingness to chastise her as often and as shamefully as he feels it necessary, Gael cannot deny her body’s response to his dominance, and when he claims her the pleasure is more intense than she would have thought possible. But with a plague ravaging their world and Gael’s reckless behavior putting her in danger, can Kai find a way to conquer her heart while also keeping her safe?
This standalone novel has a satisfying ending and can be read as a standalone or as part of the series.

Publisher’s Note: Bound to the Admiralincludes spankings and sexual scenes. If such material offends you, please don’t buy this book.
Learn more about the planet Devmaer and its sizzling people with the prequel novella Bound to the Past.It’s available FREEfor a limited time on Book Funnel here. Or buy it here: Amazon

On the writing desk in Kai’s chamber lay a gift package. Wrapped in pale blue silk and tied with a midnight blue ribbon, it was clearly paddle-shaped. Paddles were a common joining gift in Senne. They were sold in shops along with binding ribbons and other ceremonial keepsakes. Gael knew that some couples treated them as a joke, leaving them in a drawer with pretty garters and other souvenirs. She’d seen some proudly displayed on mantelpieces beside family photos. But she never thought anyone would have the audacity to give her one. She didn’t often use her title and position to avoid unpleasantness, but she would have now if she could.
Kai handed it to her and the weight of it made her catch her breath. It was exactly what she feared. She read the small tag that hung from the midnight blue ribbon. To Princess Gael and Admiral Kai with every good wish for a happy union.
“You may open it,” he said, watching her intensely.
With an enormous effort she forced her demeanor to remain neutral, not wanting the dread surging through her to register on her face. “Who is it from?” she asked, grateful that her hands weren’t shaking as she undid the bow.
“You’ve seen the tag. You know as much as I do. My guess is that it must be from someone close to you, someone who knows how difficult it’s going to be for you to settle into a joined life for four years.” The corners of his mouth lifted in a knowing smile.
Gael stared at his resolute, unreadable face, wondering how she would manage for the duration of their mateship. Four years. That’s how long the vows would bind them. It might as well be forever.
When the silk fell away, she held a long-handled ochre-colored paddle. One side of the round head was decorated with Celtic knots. The other side had the words naughty girl carved into it backwards. She puzzled over it, tracing the letters with her index finger.
“It’s written in reverse so that when it’s properly used, at length and on the same spot, those words will be paddled into your backside.” Kai said coolly.
Gael shoved the package at him, trying to step away.
He caught her by the wrist and his huge hand engulfed hers. Once again, his muscular fingers imprisoned her wrist as effectively as an iron manacle. She was helpless against his superior strength. Worse still, the memory of how those powerful hands had lit her backside on fire and drenched her pussy weakened her at the knees.
“Don’t make your fate any worse that it is already,” he said, his voice soft.
Gael looked around the room, wide-eyed, as if an escape portal might magically appear.
Kai nodded at the paddle. “This is a fine gift. We must use it immediately for good luck.” He sat on the end of the bed, drawing her close to him. 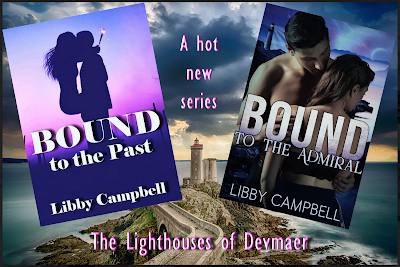 The Lighthouses of Devmaer
Bound to the Past, prequel – FREEfor a limited time here

His Land, His Law
A Time For Will

Libby Campbell in her own words:
My romance novels feature strong, self-reliant women and the powerful men who love them. Romantic by nature, I write the stories I want to read: those that feature a spicy power exchange and deliver a sting in the tale.
Canadian by birth, I also lived in Australia for a couple of decades. While living there I overcame my aversion to saucer-sized spiders and, as a condition of marriage to my Aussie Prince Charming, I swore a lifelong allegiance to the Melbourne Football Club.
Then family called and my husband and I packed up and moved. We now live on a rocky island on Canada’s West Coast, close to beaches that once were frequented by smugglers and rumrunners.
My passions are reading and writing. I adore all animals and love hiking, beachcombing, and an occasional night of dancing.

Question and answers with Libby Campbell

This series seems to be darker than anything you’ve written before. Is it a new trend for you?

What was your inspiration for Bound to the Admiral?

In 2018 my husband and I toured the Washington and Oregon coasts. I fell in love with the beautiful lighthouses that dot that coastline. They were all so different but symbolized hope and safety to ships at sea.
Plus they kind of reminded me of tiny castles and I love princess stories. Before I knew it, an entire series was shaping in my imagination and demanding to be written.

Does this book have a playlist?

I rarely play music when I’m writing but one song I listened to a lot while writing this book was Rachel D’Arcy’s song Dance for You. I love the line “I won’t dance for anyone, but I will dance for you.” It’s Gael’s song! It’s available here: Amazon.
I also watched a lot of belly dancing by the amazing Cassandra Fox.

What is the best part of writing?

When a reader enjoys a book enough to review it! It says we connected and that’s the greatest satisfaction a writer can have.

What is the hardest part?

Trying to convince my husband that I’m not writing instruction manuals.
I read all my books aloud to him because he is a supportive listener and has an excellent memory for details that are easy to trip over as the narrative grows.
He laughs in all the right places, and tenses in the action scenes, all of which is encouraging in the moments of self-doubt that plague every project.