Sex, Scandal, and the Sheriff
By Kryssie Fortune 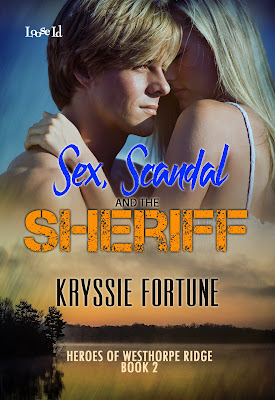 Starting over in Westhorpe Ridge wouldn’t be easy,
especially since she’d already enjoyed a spanking
and a one-night stand with the sheriff.

I want to welcome Kryssie Fortune today. Her books are right up my ally - I like books set in North Carolina and you all know I love a good series where each book can also be read as a stand alone, not to mention a sexy sheriff! Glad to have you here Kryssie!

Blurb
Jasmine Stewart (Jazz to her friends) falls for the blond stranger who spanks and seduces her at a Washington soiree. Later, when she discovers her flatmate is trying to draw her into a spy ring, she goes to the authorities. The ensuing publicity costs her her job, her security, and her future. Starting over in Westhorpe Ridge is her only option.Sean Mathews, former SEAL and Westhorpe Ridge’s sheriff, can’t forget the woman he spanked when he visited Washington, but he thinks she’s a spy. When she turns up in Westhorpe Ridge, he tries everything to make her leave town. Despite their misunderstandings, though, they can’t keep their hands off each other.As New Year’s Eve looms, the spy ring resurfaces. Jazz will need all of Sean’s SEAL prowess to survive. But because his wounded leg cost him his speed in the water, will it be enough?

About Heroes of Westhorpe Ridge Series
Westhopre Ridge is a small, North Carolina Town with a big heart. Each story is a stand-alone romance but there are recurring themes and characters. The series features former military men come home to build a new career and the women strong enough to love them.
Purchase Links
Loose id
Amazon.com
Kobo

Excerpt:
Ponytail and the minion returned, each dragging Jazz by one arm. They’d stripped to her underwear, bound her arms behind her back, and gagged her.
Sean’s heart stuttered and his stomach churned. A tornado of rage swirled inside him, but he needed to get the woman he loved back on dry land. Afterward, if the opportunity arose, her captors would die long, slow deaths at his hands. Playing his role, he gave her a lecherous stare and forced a grin. “Silence is sweet. I always said she had a big mouth.”
The look Jazz gave him should have curdled his blood. The men holding her arms laughed, and Ponytail squeezed her breast before they thrust her onto the floor by Sean’s feet. “Enjoy her. Maybe later, you’ll give me a turn with her.”
Maybe later Sean would peel their flesh from his bones, one layer at a time. For now, he shrugged. “Why not? I need to cool her hot temper first. Are we underway yet? I’ll take her on deck, and she can shiver as she takes her last ever look at dry land.”
Jazz paled behind the gag. Her eyes widened, and she looked like she wanted to weep.
Sean hated the defeated look in her eyes, but he needed to stay in character.
When he dragged her upright, she kicked his shin.
He took her chin in his and forced her to look at him. “Sweetheart, you really shouldn’t have done that. Once I get you alone, I’m going to have to punish you.”
Brains took a sip of his whiskey. “Why wait? We’ll all enjoy watching you spank her right here, right now.”
Sean felt sick. He didn’t want to abuse Jazz, but he needed to stay in his character and pretend he enjoyed it. He forced a grin and dragged Jazz over his knee. The other men moved closer, eager to watch him chastise their captive.
She wriggled and squirmed as though his lap was red hot. Sean brought his hand down hard on her ass, spreading the pain as he spanked her ten times. Bound, gagged, and almost naked, she writhed against him. Normally, if she ran her cunt over his cock, he’d get the boner from hell. This time, he just wanted this over and done. Finally, spanking complete, he shoved her off his knee like a bundle of rags. She glowered up at him from the floor. “We’ll play again later, sweetheart.”