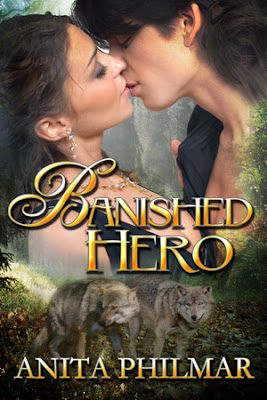 Can a sexy wolf save her or is he out to eat her alive?

I'm happy to welcome Anita Philmar back today. Banished Hero sounds like one we do not want to miss. Check out her excerpt!


With no memory of her past, Faye Lynn Berton clings to a father who curses her ability to shape-shift, then uses her special skill to scam local villagers. The only freedom she knows comes as she soars through the sky in falcon form. A chance meeting with another changling turns her world upside down. Beyond satisfying the powerful sexual cravings that follow transformation, he reveals a surprising dimension of sex between their kind…one to unlock the secrets of her soul.


Havyn Westmore has questions…Faye Lynn holds the answers. Determined to unravel her secrets, he must strives to gain her freedom and trust. Teaching her the finer techniques of transformation keeps her close while sex strengthens their bond. But on the trail of discovery, Havyn must confront his own past. Accused of a heinous crime, he was banned from his homeland. Now, he must choose between returning to face certain execution—or robbing Faye Lynn of her birthright and a life in Paradise.


“Why don’t you tell me your name?” He shifted his weight to one elbow, and his other hand eased over her stomach. His fingers combed the crisp, dark curls of her sex.
Her breath caught on a small gasp. “Faye Lynn.”
“Tell me, where do you come from?” He toyed with her brown bush, stroking, combing, and taking slow steps to the wet lips of her heat.
“I, uh...” Her hand gripped his bicep, while the other one clutched his shoulder. Short little pants escaped her lips, showing her eagerness for his touch. “We, uh, moved around a lot.”
“And what shape-shifter forms can you take?” His index finger traced the seam of her pussy.
“Oh, I...” She arched her hips, begging him to ease the fire burning within her. “I would really love for you to shut up and make my senses soar.”
He slid his body along hers until the rough texture of his chin massaged the soft white swell of her breasts. “But where should I touch you first? Here?” He licked her nipple. “Or much lower?” He nuzzled his finger between her slick folds and into her tight wet cunt. Greedy muscles tightened.
His loins swelled. He edged his legs farther apart to gain more room for his growing cock.
“Either. Both.” She lifted her breast to his lips. “I want it all.”
A throaty laugh bubbled up from his chest. Over a decade had passed since he’d shared his body with a shape-shifter, especially one who matched his animal lust. He closed his mouth around her nipple, teasing the stiff berry with his teeth and sucking on the tip, and then he released her. His taste buds wept with the desire to taste the rich cream of her pussy.
“Like that?”
“Yes, but more,” she panted.
“More.” Havyn nodded and returned to his task. Licking her nipples first, he fanned his breath against her sensitive skin then wrapped his lips around the swell of her breast.
He stroked and teased her needy flesh. His fingers glided in and out, but he ignored the hard nub begging for his attention and the hard throbbing of his cock.
“Oh...please,” she whispered on a rushed breath.
The fragrant scent of her sex fed his desire, drew him like a beacon to her heat. One hand took the place of his lips, and he kneaded her breast with his fingers. He placed tiny kisses on her stomach and circled her navel with his tongue. Her small hands dug through his hair, exciting the nerve endings. He worked his way over her belly until his chin nudged her inner thighs.
He speared the tiny bud of her desire with his tongue. She screamed. The animal cry echoed through the trees and spiked his untamed lust. A second finger slid easily into her vagina, causing her to writhe.
Her back arched. She lifted her hips in the air.
He marveled at her response, brushed his hands over her firm buttock, and squeezed. Like the doe that died a short time earlier to feed his hunger for food, this woman called another primitive passion from him, one of lust.


Anita Philmar likes to create stories that push the limit. A writer by day and a dreamer by night she wants her readers to see the world in a new way.


Influenced by old movies, she likes to develop places where anything can happen and where special moments come to life in a great read.


Read her books and decide.