Kryssie Fortune - To Wed a Werewolf

To Wed a Werewolf 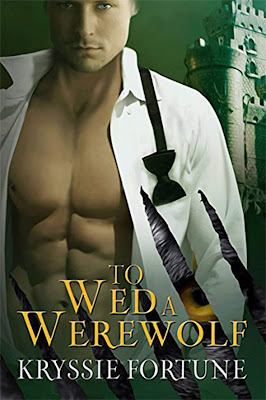 by: Kryssie Fortune
I'm happy to have Kryssie Fortune here in the Reading Room today. I think you'll agree that this book sound hot. Seems like a great summer read.

Blurb
Sylvie's more human librarian than half-blood Fae princess and she definitely prefers books to men. Then, she learns her unwanted Lykae fiancée is marrying someone else. If she doesn't stop the wedding, the Fae will resume the border war with the Werewolf nation. A high-handed Lykae security guard blocks her every move, and when her plans go awry, she's kidnapped, stripped, and bound for his pleasure.

Caleb the Cold, King of the Lykae, will do anything to make his younger brother's wedding special--even pretend he's a security guard and kidnap his brother's former fiancée. Punishing her is pure pleasure, until he realizes she's his mate. Now he needs to woo the woman he's tormented to the edge of madness, but is it too late to claim her heart, and make her his?

Caleb dropped like he’d been poleaxed, and his body flickered between primal beast, human, and true wolf forms.
“Told you he’d get what he deserves.” Ron pulled out his cell phone. “And I knew he’d come after you.”
Sylvie stepped back and leaned against the car. “What have you done?”
“Saved you, you silly cow, or did you want to fuck with that? Now stand still and be quiet while I talk to my friends.” Even drunk, Rom seemed dangerous. He keyed a preprogrammed number. “Subject acquired, but he’s tougher than I expected.”
“And,” Sylvie whispered, “he’ll kill you when the Taser charge wears off.”
Ron backhanded her. “I told you to keep quiet, or do we have to kill you too?”
Caleb saw tears mist her eyes, but she blinked them away and backed off. Gods, he needed to kiss her tears from her cheeks—right after he handed her Ron’s head on a plate.
A white van skidded to a halt beside them. Two human males jumped out, chained Caleb’s arms behind him, twisted the chain around his ankles, and pulled it tight.
Elves’ blood, the damn thing’s silver.
It locked him in primal form and burned red brands into his flesh. Pain crescendoed through him and drove his primal beast insane. His roars grew more animalistic as his humanity sank deeper inside him. He needed to kill, destroy, and maim. But whatever his form, he’d protect Sylvie.
He grasped the links, burning deep welts in his hands as he tugged at the chain, but silver was every Lykae’s Achilles’ heel. Pain spasmed through his limbs, building, burning, branding. He needed his freedom. He needed his true-mate safe, and he needed Ron and his cronies dead. Hog-tied and helpless, all he could do was flop like an out-of-water goldfish at Sylvie’s feet.
Social Media

Kryssie's pet hates are unhappy endings, and a series that end on a cliff hanger.
Her books are all stand alone even when part of series. Plot always comes before sex, but when her heroines and heroes get together, the sex is explosive and explicit. One review called it downright sensual.
Titles by Kryssie Fortune

Marriage, Mobsters, and the Marine
Sex, Scandal, and the Sheriff
Desire, Deceit, and the Doctor
Submission, Secrets, and the Soldier

Dominated by the Dragon
Taken by Twin Doms
One Knight Stand
Giving it up for the Gods
Wickedly Used
Posted by PK Corey at 12:00 AM