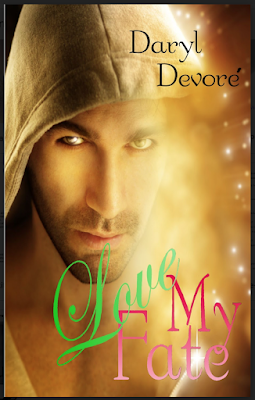 Recipe for heat. Take one human – Capricious Gray – and mix with one Fate – Thall. Add in a dash of jealousy, anger, passion and lust.
So happy to have Daryl Devoré visiting at the Reading Room! You'll want to check this one out!

6 Questions with Capri Gray from Love My Fate

1. What is your full name and what do you do?
Capricious Gray – Capri for short and to add to that – I’m a Capri-corn.
At the start of my story I was an executive in a global corporation.

3. How did you meet the man of your dreams?
That’s not easy to answer. The man of my dreamsisn’t a man – sort of. We met at a sex toy convention.

6. Any advice for the readers of your story?
If you like deep drama that focuses on the angst of modern society – this is so not the story for you. This is my story - an average woman living an average life when out-of-the-blue highly unusual things start happening.

Blurb
What's a woman to do when a voice follows her home and makes mad, passionate love to her?
Daryl Devoré’s latest is a quirky paranormal urban fantasy –Love My Fate.
Corporate businesswoman, Capricious Gray, is dragged to a sex toy convention by her best friend. After a mysterious disembodied voice helps her with her purchases, it follows her home. Passion ensues, leaving Capri torn between lust for her fantasy lover and the desperate need for reality in her life.
Thall, son of one of the Fates, harbours the irrepressible need to be with the woman he's desired from afar for years. In order to make her his, once and for all, he must help Capri get past her fears, including the fear of what he represents - a fantasy.
Can fantasy become a reality for these two lovers?

Note: This book was previously published by New Dawning Bookfair under the title Capri’s Fate. The edition has a new title, new cover and has restored previously deleted scenes.

Excerpt :
My bustier had wrapped itself around me, forcing my nipples to burst from the peek-a-boo holes. The bottle of warming lubricant landed beside me, top popped off. And amazed that I wasn't the least bit shocked, alarmed or confused, I watched as my glass dildo floated above me.
"Play with your nipples. Show me what you do to make them firm."
"Excuse me?" My eyebrows rose up to my hairline. "You want me to play with myself? In front of you?"
"Yes."
One simple, yet mortifying, word.
"I'm not a porn star."
"Just touch yourself. I will not judge you."
I rippled my fingers across my nipple, which traitorously responded. So did my lower parts. They tingled. The bustier was much tighter than I would have hooked it. My breasts were forced into a way-out-there position. My body liked the restraint. I tickled myself again. My nipple grew firm. Playing with both, I squeezed and pulled until they stood erect and pinky-proud.
"They're beautiful. Continue," the voice urged.
To the flesh on my breast, my fingers were like ice cubes. My areolas contracted. My nipples stiffened. My next touch changed to sandpaper—rough and scratchy. Tingles shivered through my body. Hot, cold, rough, soft—each new sensation was a surprise.
Sweat trickled down my neck. Pressure built deep inside. My hand turned palm up, and the vibrating nipple clamp fell into it.
I took a moment to figure out what to do. Thall didn't think to include the instructions, and I hadn't had a chance to read them yet.
My bad.
Unclasping it, I encased my nipple then hit the tiny switch. A squeal escaped me as a tiny electric pulse shot through my aroused dusky tip. The other clamp floated in front of me. I secured it onto my left nipple and held my breath.
Snap. Snap.
A surge of lust rushed through my body then centred in my crotch.
Snap.
Snap. Snap.
The electric pulses were titillating—pun intended—and random, and I found myself waiting for the next. They didn't fire together. Nor did they go off in even patterns. I lay back wallowing in the random sensations they delighted in me. I wanted this to last for hours. A small thought nudged me. How long do tiny cell batteries last?
The arousal gel poured itself over my upper thighs as strong fingertips raked the insides, forcing my legs apart.
Arousing was so the wrong term for the lubricant. Fire would be a more apt description. I've been cooler after a tough hour of hot yoga class.
Sweat rolled in streams from me, yet all I did was rest on silk pillows having my nipples erotically zapped. I pulled my knees up and let them fall. I was fully exposed and horny as hell. I wanted to be fucked. Needed to be fucked.
The bottle of warming gel flipped pouring liquid heat down my crotch. My glass penis hung, head down, aimed between my legs.
"Do you want it?"
I groaned.
"Do you want it inside you—mercilessly driving you to a screaming orgasm?"
Do the Fates understand the term—duh!
A hand separated my vulva and began long glides up the insides of my labia. I sighed and sunk to the edge of bliss.
Snap.
Snap. Snap.
Damn! Forgot about the nipple clamps.
The long fondles turned to tiny flicks tickling my labia and inner thighs.
I squirmed and wiggled. Fire danced over my body. "Touch me!"
"Where?" His voice brushed past my ear.
"My clit."
Every sensation stopped. I think my heart did too. I didn't breathe.
Time-stopping, scorching strokes on the smallest part of my body. My fingers dug into the pillows as I experienced the most mind-fucking sensation ever and released an intense scream of joy.
"Ohhhh!"
"Again?" His voice was soft and tinted with humour.
"Yes!" It was more of a snarl than a polite response.
I waited. The nipple clamp zapped me. I squealed. His petting dragged across my clitoris with molasses speed. My heart raced, my breaths were shallow pants as I arched my hips up and spread my legs as wide as I could. "Touch me again. Please."
Total bitch in heat and I didn't give a damn.

Daryl (@daryldevore) lives in an old farmhouse in Ontario, Canada, with her husband, two black cats - Licorice and Ginny-Furr Purrkins - and some house ghosts. Her daughter is grown and has flown the nest. Daryl loves to take long walks on her quiet country road or snowshoe across the back acres, and in the summer, kayak along the St. Lawrence River. She has touched a moon rock, a mammoth, and a meteorite. She’s been deep in the ocean in a submarine, flown high over Niagara Falls in a helicopter, and used the ladies room in a royal palace. Life’s an adventure and Daryl’s having fun living it.
Blog - Romance - Sweet to Heat
Twitter
MEWE

Pinterest Page for Love My Fate- https://www.pinterest.ca/daryldevore2013/love-my-fate/
Posted by PK Corey at 12:00 AM