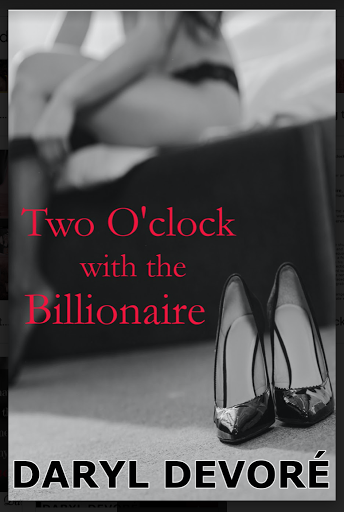 Two O’clock with the Billionaire

Arianne’s just regular girl pushed into a corner and desperately looking for a way out.

Two O’clock with the Billionaire is a prime example of what happens when a story takes over. This was just supposed to be a sweet little romance, but it turns out Derek and Arianne had other ideas.

“Women!” Derek snapped his cell phone shut and threw it onto his night table. He untied his blue-striped silk tie and tossed it onto the bed. In moments, his Italian-cut three-piece suit lay equally flung aside. Pulling open the bottom dresser drawer, he removed a fraying college sweatshirt and a pair of faded blue jeans. After lacing up his well-worn sneakers and ruffling his groomed hair, he stared at his reflection in his full-length mirror. The transformation from chairman of the board to construction worker took less than five minutes. Grabbing his wallet, he removed his driver’s license, one charge card, and thirty-five dollars and placed them into an old brown wallet. He stuffed it into his back-hip pocket, grabbed his cell phone and exited his bedroom.

Donning his jacket with the New York Rangers team’s logo, he checked the pocket for his car keys, then rode his private elevator down to the basement parking garage. He walked past his three expensive imports, unlocked the rusted, dark blue Camaro and drove out of the upper rich side.

Traffic was a beast. Snow had fallen all day. The roads were slippery and regular people were anxious to get home. Not Derek. He headed to Charlie’s, a topless bar on the corner of don’t know and don’t care.

Two O’clock with the Billionaire is one of Daryl Devoré’s hot romances. A contemporary romance sweetened with a bit of vanilla sexcapades.

Where Derek Davenport is concerned, women only had one thing in mind: trap him into a marriage. The perfect way out? Hire a courtesan. While partying with his buddies he places an online ad that reads – Woman Wanted.

Unemployed and nearing financial desperation, Arianne is forced to step out of her comfort zone and answers an ad that reads Woman Wanted. With minimal hours and excellent pay, she accepts the position of courtesan to a handsome billionaire.

Their sexual antics cause emotions neither is willing to admit it. Will Arianne and Derek drive each other crazy…or will they fall in love first? 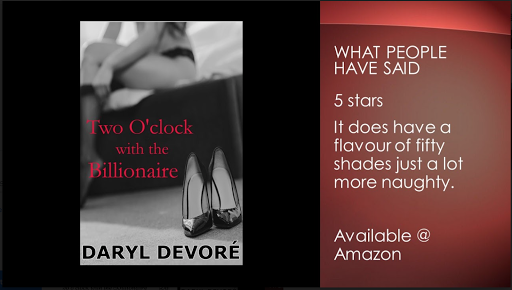