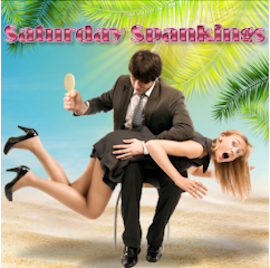 Welcome back to Saturday Spankings! I’m putting up snippets from the second book in the On the River series – Secrets on the River. This series combines everyone from my Cassie’s Space series and my Cal’s Law series. And they do have a good time together.

In today’s snippet Cal has to go to Raleigh for business. Jenny does not like being left alone, and she doesn’t mind tormenting her husband a little to get back at him for going.

Jenny managed to keep herself busy on Saturday but after a quick dinner her loneliness seemed to close around her. She never got to spend enough time with Cal in her opinion, but just knowing he was out of town really depressed her. When her phone rang, she grabbed it gratefully.

“Not as much as I miss you!” she insisted. “Any chance you can come home early?”

“No, honey. It’s probably going to be Monday about noon at the earliest. But I’m planning on staying home until Tuesday morning, so don’t make any plans.”

“That’s great, but how am I supposed to make it through until then? I wonder if Bob has any plans for the evening.”

“Jenny…” Cal growled. He was not fond of B.O.B. – Jenny’s battery operated boyfriend.

“She could behave herself and show a bit of self-control,” Cal suggested.

“Yeah, that self-control stuff, I’ve never been really big on that you know. And when I get to thinking about you running your hands all over me, and sucking on my nipples and then I could return the favor and suc…”

“Damn, Jenny are you trying to kill me?” Cal rumbled. “I’ll take care of this behavior Monday afternoon. Do you understand, young lady?”