I is for infection (trust me on this)

I love this whole A-Z thing. I like getting to tell you a little about myself and learn more about you all. But today I do want to promote a book.  I think everyone knows I love reading spanking stories. But like all of us, I have a variety of taste – this book isn’t a spanking book, but it is a great book.

The book is The Infection, the first in a new series – The Melting, and the author is Donna Steele. I’ve known Donna for years and I love her writing. I’ve had the privilege of reading the first two in this series and I know how good they are. I hope you’ll try them out.


The Infection, Book One of The Melting Series 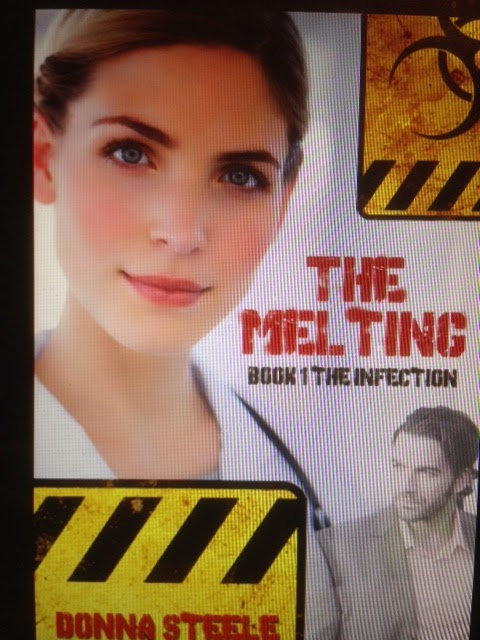 Blurb - David Morrow has studied global warming first as a prodigy and now as a respected professor. He knows the value of sustainability and clean energy. But is it too late for the planet? He expected the rising of the seas, harsh hundred-year storms, but he never expected this.
Amanda Sutton first studied medicine to please her father, now she’s part of the scramble to find a cure before the virus destroys civilization.
Will the strange connection between them keep them together as the world disintegrates around them?

Yes, I like to write the end of the world and the day after stories. I love to see how people step up and handle significant even overwhelming changes in their life.
Donna

David knew he should never have waited this long to check out Amanda's apartment for some clue. There had still been no contact from her. Over seventy-two hours. None of his contacts had called back either. Were they too busy or was he persona non grata everywhere now?
The no-contact could not be Amanda's choice. He was confident of that. Somehow he could feel it. He knew she hadn't returned to her apartment, therefore he'd thought there was no need to come over.
He should have checked it out anyway. Her car sat in its normal slot, which had to mean she'd been taken rather than joining of her own volition.
Damn, he could feel her missing deep in his very soul. His numerous attempts at getting past the guard at the Walter Reed project, and then his attempts to reach someone at the CDC and WHO had been as completely rebuffed as his government contacts. They had been respectful at first, but that had changed as things had worsened. This global warming flu—David liked the name at least—was so much worse than the mainstream media had let on. Even the relatively short time Amanda had been missing things had worsened beyond his imagination. At least the information had. Some news agencies were finally leaking the incredible death toll figures and if they were even half way accurate, this was beyond scary. He'd seen unofficial photos of mass graves on one website before it was yanked. He didn't have to stretch to believe they were real. He had a stiff neck and headache himself, but ignored it in his need to locate her.
The news had finally broken officially that the contagion began on those cruise ships when they had been exposed to some thawing virus. It wasn't what he'd anticipated in his studies, but he wasn't surprised as so many of his fellow academics tried to pretend to be. Where did you send an "I told you so" this big? He hadn't been contacted for any quotes either, which grimly amused him at least. His popularity with the remaining administration was no doubt suffering even worse, since he'd been proven more right than even he had seen coming. Rising water levels weren't nearly as immediate.
David was unable to reach Scott any longer. The situation had worsened at all hospitals, understandably. Pathology had been closed down to free up all health care workers to aid in the pandemic. Cause of death wasn't as important as treating the still living, though it had been a jolt to reach an answering machine at the morgue. He could only hope his friend was still alive.
He'd watched a run on a pharmacy on the news last night. Things were degenerating into fear-induced riots in some cities. Regular looting of unimportant things, like TVs, happened as well, but less than he would have thought. Food and drugs were the items of choice now.
At least one small town in the upper mid-west had officially instituted a mass-grave. That news report had only aired once, then been removed, but there wasn't time or space for anything else. No one had said cholera, at least on the news, but that would be next if anyone survived. David was sure more than one place had begun the same grim practice.
He ignored the headache, which had increased even since he'd arrived at her complex. He wasn't sleeping well and not only from lack of Amanda. He had dreams of people wandering lost. He tried to herd them to him, so they could at least be together, but so many weren't listening.
He didn't have time to get sick. He had to find Amanda. She would not have remained silent this long of her own free will. While being held prisoner sounded harsh, he had no doubt that's exactly what the government would do. He let himself into her apartment. Things didn't look disturbed, at least there had been no fight, but she hadn't taken the time to get ready to be away either. The trash hadn't even been emptied. Of course regular pick up of trash had halted a couple of days ago.
He headed into her bedroom. The bed had been hastily made and her small suitcase gone. She hadn't expected to be away this long, or she would have taken the larger suitcase and more clothing.
He turned toward the dresser and something shiny on the floor caught his eye. He bent over, causing his headache to grow, but not as much as recognizing what lay in front of him.
Her cross lay on the carpet. She had gone with them, but under duress.

You can find The Infection, Book one of the Melting Series at Amazon, Barnes and Noble and All Romance.

Bio
Women Strong Enough for Love
I write science fiction, paranormal and women’s fiction romance eBooks about women coming into their strength and having the courage to find and accept love.
As an empty nester with my beloved best friend and husband (who actually encourages this mad passion of mine) I write all the time – whether or not I have a pen or keyboard handy.
Ever since I learned to read—from Superman Comics, Dick, Jane and Sally held no appeal—I’ve wanted to write. The possibilities of science fiction have always drawn me and I’ve read them all.  There just needed to be a little more romance in them. I finally got up the courage and I’m delighted that I’m able to share these stories with you.
My premiere novel, a science fiction romance – Rth Rising – was released on March 3, 2012 through Rebel Ink Press. My paranormal romance eBooks Learning Trust, and Wraith’s Heart  are now available at all eBook sellers. Wraith’s Heart  and Learning Trust are now also available in paperback through Amazon.
My small town romance novels – Homecoming, Welcome Home, Red Shoes, Nowhere for Christmas and Dance Partner  are available at all eBook vendors.


I’m a member of Romance Writers of America, the Fantasy, Futuristic & Paranormal Chapter of RWA and the Heart of Carolina Romance Writers.
Posted by PK Corey at 4:00 PM