Cara Bristol's new book Long Shot is out now, and I do want to spot light that today, but I also have to give a big shout out to her Breeders series. Not being a big Sci-fi fan myself I didn't plan on reading them at first glance. But the snippets from Saturday Spankings were so interesting I just had to. I ended up loving them! So as you work your way through your summer reading list don't forget Breeders and the second in the series Terran!

And now more about Cara and Long Shot... 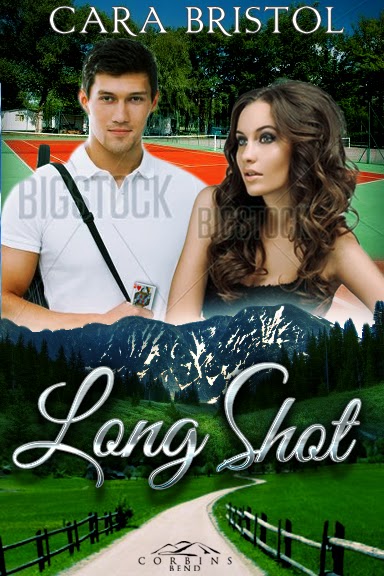 Abigail Delaney works at her great aunts antique store, which carries vintage spanking implements. She is arranging the paddles and canes when Harris Montgomery, a sexy guy she’s met only once, comes in and buys a spanking bench. In this scene from Long Shot, Cara Bristol’s new Corbin’s Bend spanking romance, Harris tells Abby to pick out a paddle to go with the bench.

An excerpt from Long Shot by Cara Bristol

She wet her lips and looked everywhere but at him. “What kind of paddle would you prefer?”
“What kind would you recommend?” he countered, knowing full well she had no idea of the differences.
“Well…” Abby moved to the wall where she’d hung the paddles carefully on coat racks. “We have uh, this kind.” She pointed to a smooth wooden ping pong style.
“A solid choice to cover a lot of surface area,” he said. “What else?”
“This one has holes.” She gestured to another.
He shook his head. “Too stingy.” For a beginner. Abby might have a secret spanking fetish, but she was still a virgin, so to speak.
“They’re all here.” Blushing profusely, she swept a graceful arm across the row of paddles like Vanna White lighting up a new Wheel of Fortune puzzle. “And over there.” She gestured to a washstand upon which several more rested and hung from the carved towel holder.
“That one’s leather.” She unhooked a more generous oblong-shaped one, and traced the edge before smoothing her hand over the flat surface. He’d been right about her liking for leather. He suppressed a grin and watched her caress the paddle blade. Her skin appeared pale next to the darkness of the hide, her nails on the short side, but painted pink. Spanked ass pink. He bit back a growl.
“Let me see.” Harris stepped over a pile of wadded newspapers. His cock pressed against the zipper of his jeans. He allowed his gaze to slide down to her chest, rising and falling. Her nipples formed beads underneath her ecru lace poet-style blouse. Leather and lace. Hard and soft. Masculine and feminine. Sexy.
He scanned her face. An answering desire swirled in her hazel eyes, but she wet her lips nervously. Seeing her tiny tongue flick over her lips cinched his intention. He’d offered to buy the bench on a whim, on a fantasy. But he would see her kneeling over it.
As he took the paddle, he allowed a finger to brush against the softness of hers. He squeezed the reinforced handle, testing the grip. Good fit. Abby’s mouth had parted, and her eyes riveted on the implement.
He snapped it against his thigh. CRACK! Abby jumped. His cock ached.
“This one.” He decided. “How much?” Didn’t matter. He’d pay any price. Seeing the fascination on her face made it worth any and every penny she asked.
“Sixty dollars.”
“You don’t need to check with your aunt?” he teased.
“She gave me carte blanche to price smaller items.”
He pulled out his wallet and handed his credit card and the paddle. “I’ll carry the bench to the register.”
Abby scurried to the front and rang up his purchases, using both an old manual cash register and a very modern credit card scanner. With amusement, he watched as she wrapped the paddle in tissue paper as if it was a fine piece of china and then bagged it.
“Thank you for shopping at Auntie Q’s,” she said politely.
Harris tucked his swaddled purchase under his arm, then picked up the bench. She hurried ahead to open the door.
He peered down at her. “Have you ever been spanked, Abby Delaney?” he asked in low voice.
Long Shot blurb
Abby Delaney moves to Corbin’s Bend to work at her aunt’s antique store to recover from a painful divorce. She gets more than expected when she meets sexy, charming Harris Montgomery, a local businessman and tennis pro, a man who seems to be the exact opposite of her ex-husband. Through Harris, she discovers her submissive side when he introduces her to spanking good times, and she begins to trust herself again.  But when the relationship progresses to a deeper level, she discovers Harris and her ex share more in common than she’d thought. With future happiness on the line, can she risk surrendering her heart on a long shot?